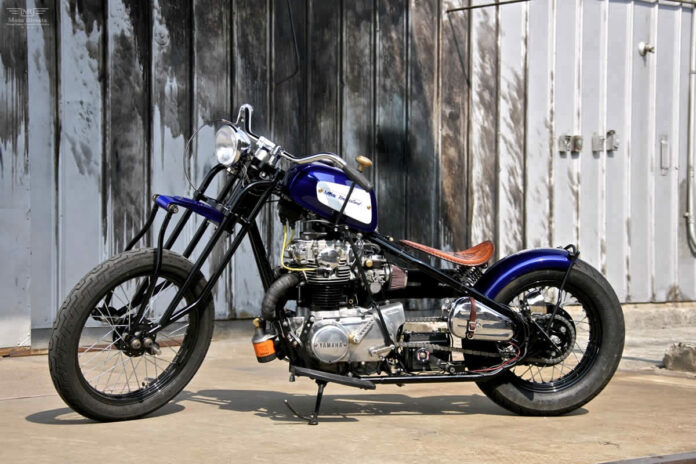 Richard Coon from High Speed Customs, Birmingham Alabama began his interest in motorcycles at the ripe old age of 9 when he first started riding motocross.

This is also when he first started to work on bikes, out of necessity to keep them going. Working as a aircraft mechanic in the military played an important role in the development of some serious mechanical skills. Richard tells us he has basically been riding and wrenching for the last 30 years.

He is inspired by the likes of Pat Peterson at Led Shed, Indian Larry and Billy Lane and according to Richard “he is not really in the business of building bikes, he just builds what he likes and people seem to like what he is doing” The bike is called ‘Miss Understood’ which started out as a stock 1981 Yamaha XS650 that was chopped for competition.

According to Richard “With this build the part that inspired me most was building the leaf spring, it took some time to get it right because my butt would be riding down the highway on it.  I was really hoping to build a unique 650 with floor boards, foot clutch, tank shifter etc. with a real old school feel for a Yamaha.”

For this build Richard used an old mustang leaf spring and also did most of the fabrication in his speed garage. Our personal favorite is the tank shifter which is made out of a turn of the century brass school doorknob. Richard also ran some floor boards and made the pedals out of lake pipe covers and the leather seat was done by Richards buddy Christian at XIAN leather.

Richard has done great fabrication on this build, from the old mustang leaf spring to the tank and the front end, every thing ties up perfectly on this bike. The awesome images are thanks to Jack Criswell from Adpix who captured the beauty of this beast!