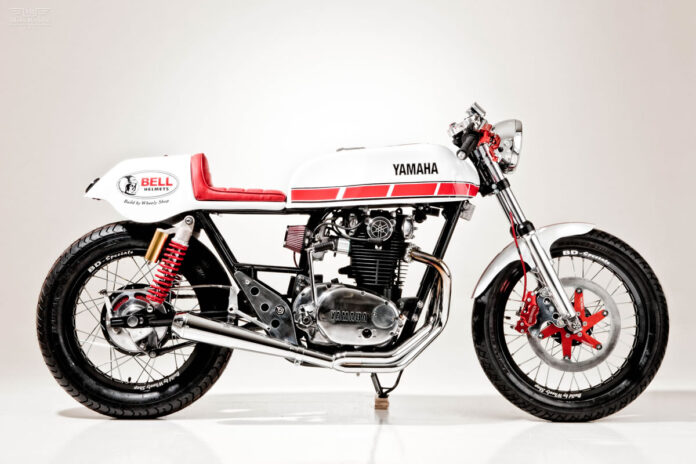 Today’s feature bike was a lucky find for us, another one of those times when all the pieces of the puzzle just came together perfectly. What you see is a beautiful Yamaha XS650 Cafe Racer built by Marc De Vriese from Wheely Shop in Belgium.

This is not the first time Marc has completed a custom build from a Yamaha XS650, previous builds included this XS Dirt Track and XS Mondial.

This bike was built to be presented at the Bike Design stand during the National Cars & Bikes show, held in Brussels during January 2012. Plans were made during October 2011 with the build itself started in November. Things had to go faster than ever, Marc runs a busy bicycle shop in the daytime so all the work had to be completed after hours.

The engine was completely rebuilt and tuned with hot cams, Keihin 32 mm flat slides en K&N air filters. The downpipes (hot cams also) came from Mike’s XS and are completed with a Megaton exhaust from Highway Hawk, who also provided the speedo and taillight. The front brake was upgraded to a Beringer cast iron floating disc and a radial master cylinder and cnc caliper. The caliper was fitted with a hand made adapter. The rear brake was kept as original but Marc made some air vents to prevent overheating of the drum brake.

The clutch cable was replaced with a hydraulic system, operated by a radial clutch master cylinder, also from the French company Beringer. Goodridge steel braided brake-lines in red color were made for both the clutch and front brake.

The frame was shortened and a sub-frame to mount the seat cowl was welded in place. The cowl doesn’t house a battery as it was discarded to keep things light. A power dynamo on the crankshaft provides all the volts needed for ignition and lights and the engine is now started with kick start only.

Many parts where handmade, such as the mounting plates for the engine, side plates of the frame and a lot of dirty polishing was done to get a nice shiny look on the engine, fork tubes and rear brake.

The origin of the fuel tank is unknown to Marc, he just had it laying in stock for years. Nice detail is the chin cushion made together with the seat and the frame and wheels were powder coated. As Marc is a big fan of Yamaha’s XS, he felt he had to have the bodywork painted in Yamaha’s 50 anniversary style as a tribute.