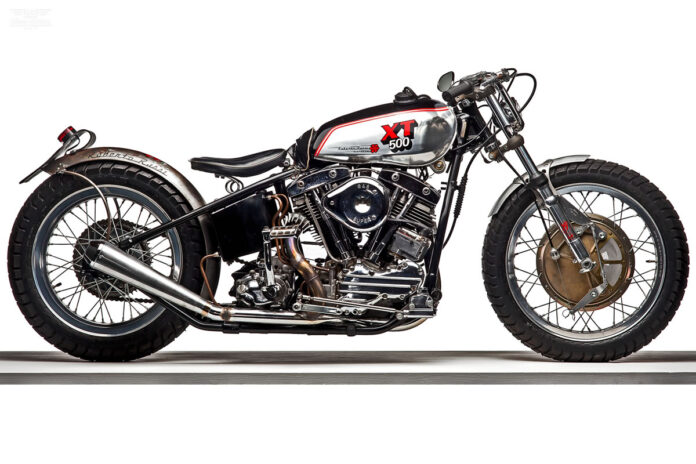 L’atelier di Roberto Rossi is a dream factory in the Italian countryside, where Roberto, as a teacher of older times, not only tells tales of heroes, race-car drivers, and inventors, but turns these glories into reality through interpreting the wishes of his customers.

Italy’s Roberto Rossi is a romantic, he’s pragmatic, and he’s more than a little colorblind. He’s a dreamer who re-styles modern age Harleys with the eye and malice of an old enthusiast. He’s a traditionalist, but make no mistake: he’s not nostalgic.

A beautiful looking and fine handling motorcycle satisfies his interests more than a go fast machine. He prefers riding a customized bike rather than an anonymous looking stock mount. Roberto avoids motorcycle rallies, and he roots for sidevalves in competitions. He rides lost and forgotten roads on old scooters and Harleys.

Roberto’s passion for motorcycles dates back to childhood when, as a small boy, he made unique pieces with a tailor’s sensibility and precision. His attention to every detail creates uncompromising bikes each and every time. Each customer can be guaranteed the special attention it takes to create something unique and it is said that working with Roberto is a trip back into the deep tradition and history of mechanical culture. This happens because Roberto’s work is based on research and documentation. The desire to search into the past for a detail that reminds the owner of that special historical motorcycle, a particular car, or other design cue that will give their motorcycle a distinctive quality, is an aspect of what makes these bikes special and unique to their owners.

There’s a Rossi family feeling projected from this style of motorcycle. It’s a feeling where the details make the difference; hidden details, usually imperceptible to human view, but always present and in effect, fitting and never discounted.

In a converted stable you find the mechanical glories that are the main source for Roberto’s inspiration. Old motorcycles, an authentic Mille Miglia Alfa Romeo 1750 GS Zagato (once owned by Tazio Nuvolari), old bicycles, tractors, Vespas, and a large collection of hard-to-find items are just a few of the treasures. That’s how Roberto reinvents his motorcycles, by referencing the past. It’s a rare experience to commission a bike from Roberto, as his motorcycles are machines born from emotions.

The featured bike is XT Interceptor, for Roberto this was a time for him to do something new and something he hadn’t seen before. The wishbone chassis and late Shovel engine were perfect starting points to create and shape the structure and proportions Roberto had in his head. These ideas erupted spontaneously, he was clear in his objective and attention to detail. His focus on proportion is like a tailor who has been tasked with creating a custom suit.

The front end is a magnesium GP Ceriani unit, the front brake is a magnesium 280 Fontana, front and rear wheels are from Borrani, handle bars are Guzzi V7 Special, fenders are handmade from aluminum. The finishing touch breaks the rules: the beautiful aluminum tank is from a 1981 Yamaha XT 500.

Roberto had built three bikes for this particular customer before he took on this project. This customer gave Roberto a blank check, allowing him total and free rein to decide everything. The result of this circumstance is the XT Interceptor, a unique, wonderful machine, which took two years to build.

The last 2 images were shot for Wrangler Blue Bell in 2010, featured with the bike is American Supermodel Tony Ward.