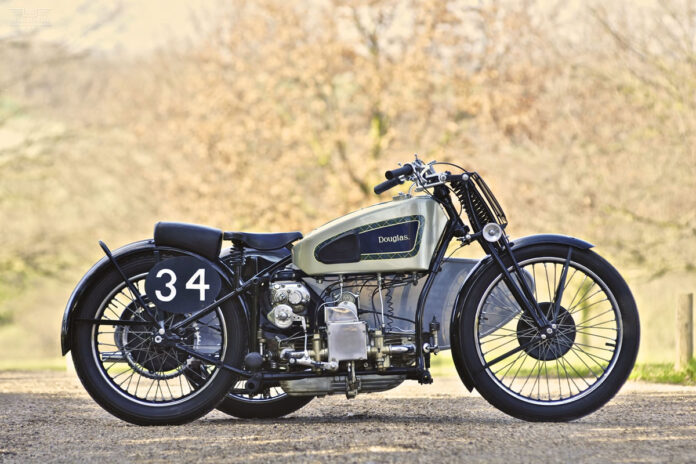 Douglas Motorcycles was a British motorcycle manufacturer dating back as far as 1882. The company was based in Kingswood, Bristol U.K, and was owned by the Douglas family.

Two brothers, William and Edward Douglas founded the Douglas Engineering Company in 1882. Douglas was remarkably known for it’s horizontally opposed twin cylinder motorcycles and speedway machines. In 1907 a 350cc Douglas motorcycle was on sale, by 1915 the engine was placed lengthways in the frame with belt final drive and electric lightning. During World War 1 Douglas was a major motorcycle supplier, manufacturing a massive 70,000 motorcycles for military use.

Douglas motorcycles also became popular in dirt track racing. Australian riders, promoters and engineers featured prominently in the growth and success of Douglas dirt track machines. With a low center of gravity, good power output, ease of steering and sliding, the Douglas was an outstanding machine for this kind of racing. Douglas had few successors in motorcycle racing and trial events, Tom Sheard won the 500cc Senior TT and Douglas motorcycles also won the first ever Isle of Man sidecar race with Freddie Dixon. For today’s feature we are taking a look at a rare vintage beauty a Douglas 750cc Works Racing Sidecar Outfit. Douglas motorcycles had set the milestone with their Dirt track racing but this did not result well on the sales of their production models. 1931 was the year of the tartan tank models and this Works outfit was presented in that livery. It is believed to be one of the just three examples of this Works model built and thought to be Jack Douglas’s (grandson of the founder) own machine.

The 750cc racer featured Douglas forks, Sturmey-Archer gearbox to Douglas’s order. A Bronze crankcase for extra strength with cylinder barrels spigotted and ground in with distinctive exhaust porting. The model also featured highly effective 9-inch servo-assisted brakes and a two-section fuel tank. The sidecar was cleverly hinged for easy access to the engine.

The Douglas racing union is a small and select group and this machine has passed through the hands of Dr Joe Bailey and Len Cole before its acquisition, in fully dismantled state, by renowned Douglas collector Colin Clifford. By one of those amazing coincidences, the sidecar was located in Bristol at a later date and reunited with the machine.

This machine received a thorough restoration, taking it back in time as close as possible to the original works, specification and presentation. This restored bike is thought to be the only complete Works outfit surviving.