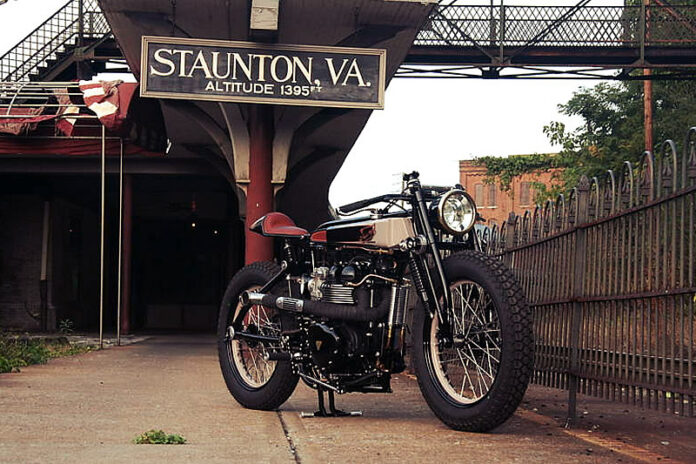 The man behind LC Fabrications is Jeremy Cupp an old school craftsman, who also builds parts for Triumph and Sportsters.

TT Deluxe was a smoke damaged ’06 Bonneville black’ Jeremy won at auction for $300. We have searched for the smoke damaged picture of this bike but haven’t been able to find one. Transforming a smoke damaged bike to a vintage café racer was not an easy job. Jeremy began by researching all types of 1900’s to 1930’s European bikes. Starting with the frame, Jeremy went with a lugged design for some extra detail. He made the cradle removable to stay true to the European style, along with the rear brake drum. For the paint Jeremy wanted a sort of scalloped style (Triumph thing). The logos on the tank are copper leaf versions of the vintage 1910-1914 Triumph logo.

The end result is what Jeremy imagined, a bike which combines a vintage spirit; paying tribute to the early Triumphs (1910’s) yet has a contemporary (2006 Bonneville Black) Triumph power plant.