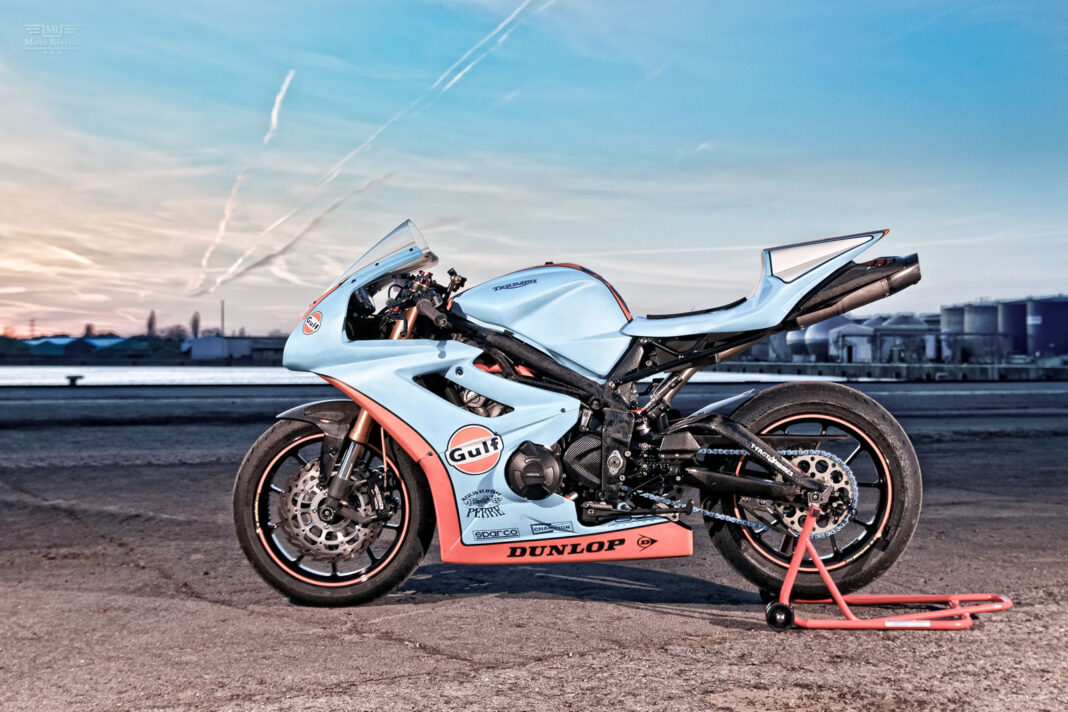 It’s not that often we get to feature a modified Supersport bike like this Triumph Daytona 675 Gulf, built by T-Factorbikes Belgium. I am a big fan of racing colors, especially the signature light blue and orange Gulf livery.

These are one of the most famous corporate racing colors and have been replicated by other racing teams sponsored by Gulf. Most of its fame is attributed to the fact that in the 1971 film Le Mans, Steve McQueen’s character, Michael Delaney, drives for the Gulf team.

The Triumph Daytona 675 is a direct decedent of the Daytona 650; it first appeared in 2006 and instantly became the benchmark bike for the contested Supersport class. This Triumph Daytona 675 was rebuilt for use on track days. It involved tuning the engine, improving the braking and losing weight. Several actions where undertaken to gain engine power. First, a K&N filter was mounted on the intake side so the engine could breathe better. Then the original exhaust system was swapped with a full racing system by Akrapovic. The latter is made of titanium witch helped to lose some weight and thus improving the overall handling of the bike too. These changes made the factory mapping of the Triumph Daytona 675 rather useless so they remapped it all with the aid of Tuneboy software. This all resulted in an impressive power gain, swiftly transmittable to the tarmac through an Active Quick action throttle. Lastly, to make sure they’d never miss a beat, a slipper clutch was mounted.

To lose weight, many hard parts were replaced by lightweight carbon and aluminum versions. The wheels are Marchesini Forged aluminum. One can imagine that after all these modifications, the handling of the bike changed a lot which made a suspension upgrade mandatory. Bitubo fully adjustable pressurized cartridge forks were mounted in front and the original rear shock made place for a Bitubo XXF31 racing monoshock.

The racing bodywork received some beautiful matt Gulf paintwork (no decals!). Like to see/buy this bike, then visit T-Factorbikes in Belgium.