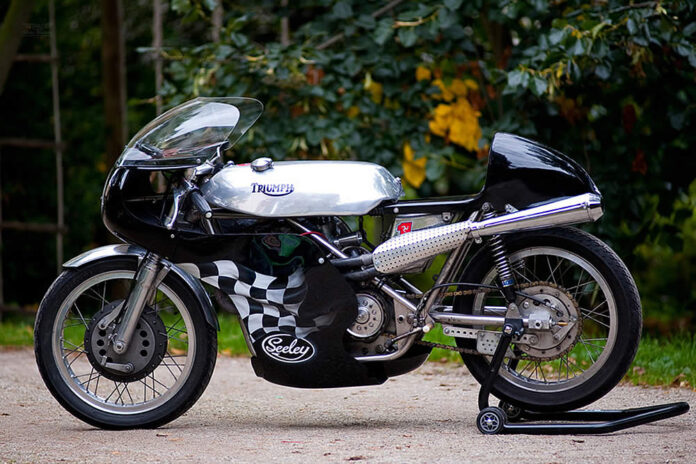 Back by popular demand! Previously we featured one of Vincent’s bikes the 1963 Triton, the bike received the best feedback by our readers and the most likes so far therefore it is only fitting we feature another.

This Triley we found on ‘The MotArt’ blog, which is curated by Frank Sider, it belongs to Frenchmen Vincent Michel who is also responsible for the cool shots of this Triley. The Triley was built with a Triumph 6T (Thunderbird) engine mounted directly to a Seeley frame. The Seeley frame was created by British builder and side car racer Colin Seeley. He is known and respected by everyone in motorcycle circles. In the Sixties, he won the British Championship and six Isle of Man TT silver replicas.

The Triley’s cylinder engine was increased to 750cc and the Vilo has been lightened, high compression pistons, reinforced connecting rods. Original Seeley magnesium front breaks and forks, Norton Manx hub and rear brake and a Quaife six-speed gearbox. Triley is a fast and sleek motorbike. Ralph from Aero Color Design did the paintwork on Triley adding British and checkered flag paintwork to the bike.

We love the details of this Triley and in particular the Jolly Roger hidden on the underside of the rear fender. This Triley is a work of art and Vincent Michel has captured the beauty of this bike with some awesome photography; we can’t get enough of his bikes or images!