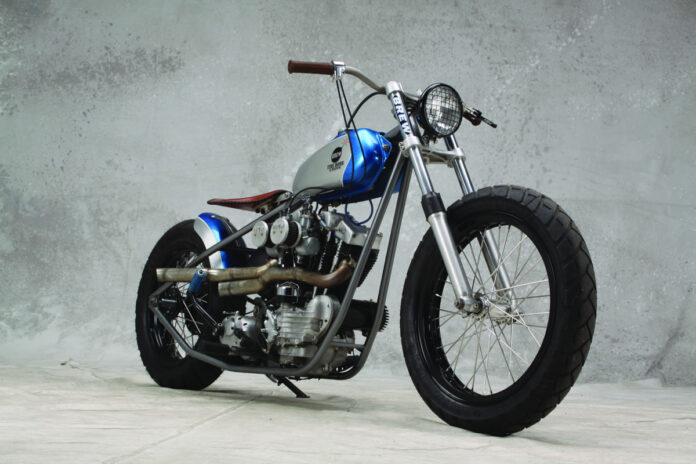 The feature of today Time Bomb 45 Magnum is a tribute to Randy Smith , the first engine builder to mate a Bit Twin top end to a set of Flathead cases back in the 70s. Randy Smith founded Custom Cycle Engineering in 1967. Randy was a unique pioneer in the Harley aftermarket industry developing some of the first custom aftermarket parts and building some of the industries most ground breaking customs bikes. To begin the build Steve did a lot of research and decided to follow Randy Smith’s idea. Following in Randy’s footstep was challenging enough, Steve decided to take his build even a bit further and split the Ironhead’s rocker boxes.

We are not talking about some average engine building; a build like this requires tremendous skills to perform the transition. The 1985 H-D 45 cases were welded to allow aperture for the superior 900cc cylinders. The cylinder base boltholes were plugged and welded and the holes were relocated for case studs.

Then Sportster heads were machined for dual plugs and the intake area was machined away and new intakes brazed in, then ported to allow for dual Amal Monobloc carbs. The details of the engine work is full on, head to the website to read about the complete engine build. Steve wanted to make this bike as light as possible, for transmission he decided to use a 1950s BSA A10 pre-unit 4-speed with a stock kicker arm and a hippy killer padel. Steve and his son Chad made the frame in house with 4130 steel tubing with a neck raked to 32-degrees and stretched 3-inches. At the front Time Bomb 45 Magnum features Betor Bultaco front fork and the triple trees are classic Ceriani. The front wheel is a 19-inch Akront, laced to a custom flat track hub with Buchanan SS Spokes and the rear is a 1981 Honda CR450 hub and Excell 17-inch alloy rim.

The beautiful gas tank is an old 1977 Husqvarna alloy unit and the oil tank is a Sucker Punch Sally’s H-Bomb. The Glitter paint, graphics frame powder coating and the polishing, taillight, foot controls, rear fender all were in house fabricated by Steve and his son Chad.

Weighing 311 pounds, Time Bomb 45 Magnum took 650 hours in total to build, including 320 hours which was spent on the mighty engine alone.