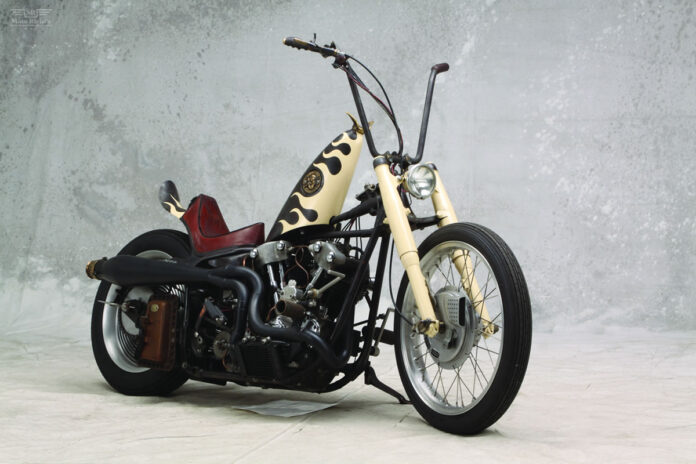 We are excited to see that some of the custom motorbike builders are pushing the boundaries of the custom motorbike world and one of them is Lock Baker from Eastern Fabrications. According to Lock “If you are looking for a motorcycle that follows the latest fad in the bike industry, you should be best served with another shop. I am more interested in what has not been done than what already has”.

The feature of the day is custom Knucklehead aka The Speed Fetus; this bike was Baker’s attempt to capture some of the Japanese Harley style. Japanese custom bikes have often been a source of inspiration for so many builders around the world. According to Lock Baker “I wanted this bike to have a huge amount of “spirit”. What I mean by that is attempting to engineer in a sense of history, memories, wear and tear, wrenching, and patination.”

For this build Lock combined parts you wouldn’t think would work together including the Indian transmission with the Harley-Davidson Knucklehead motor and the Moto Guzzi forks with the Triumph brake.

The Speed Fetus frame is half Harley-Davidson Duo-Glide and half Eastern Fabrications, Lock made the frame tubing and the handlebars have a smaller diameter to make the bike seem under developed. The motor was fitted an inch lower in the frame which allows for the dual backbone/sea tube setup.  The inside of the engine was also lightened and the flywheels were shaved to half of their original mass. Öhlins made a monoshock rear end especially for Lock.

All the parts on this custom Knucklehead have been hand crafted by Lock including the pipes, fender tail unit, oil tank, gas tank, foot controls, cast bronze risers, bars, cast bronze throttle, leather grips, top tree, brass motor mounts, intake manifold, carved brass shifter knob and steering damper. A couple of others who contributed to this build are Heyltje Rose for the leather-work and Alex Lerner for the wiring.

With this custom Knucklehead Lock Baker has proved that an attempt to create something unique can be more desirable then creating something that already exists. The Speed Fetus is all about true craftsmanship and it does elevate my desire to attempt a build of my own!