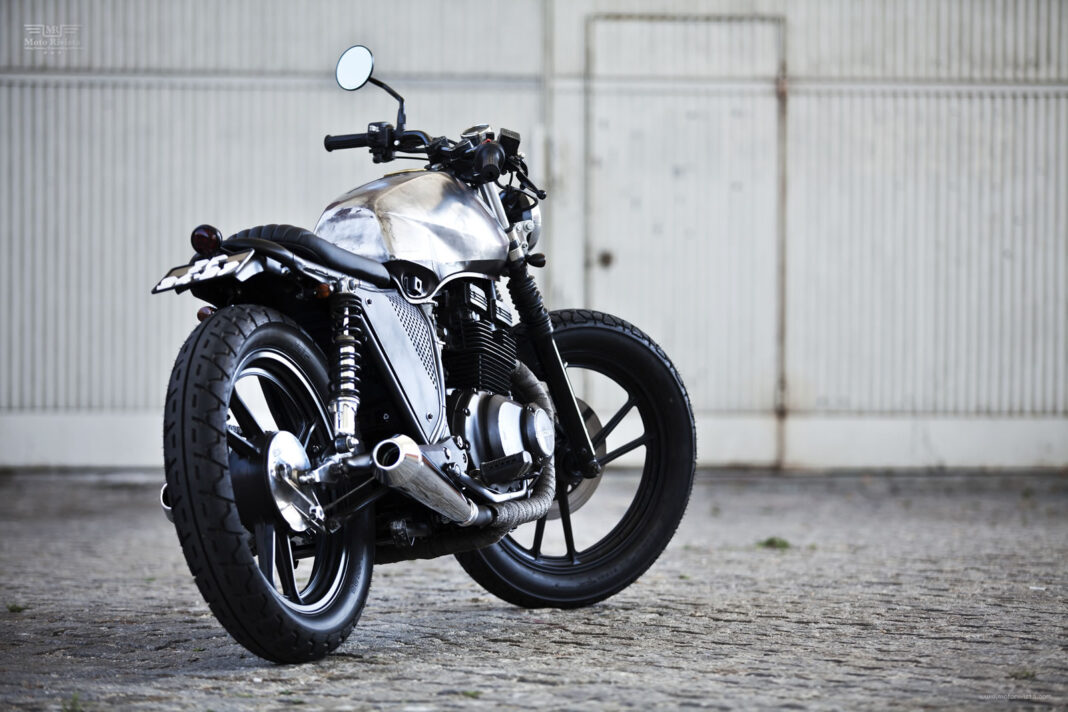 One of the best things about working on Moto Rivista is witnessing the evolution of a custom motorbike builder and their creation. It starts with a passion to build a desired custom motorbike and progresses to a successful custom shop. This Suzuki GSX400 Dented Brat is my first build, it was a low-cost project completed for pure fun. I found the stock Suzuki GSX400 over the internet. After a month looking at the photos of the bike full of dust I decided to see it in person. I talked to the owner and finally I went to a small village in the district of Leiria, Portugal. The engine started on the first attempt, I knew I couldn’t leave the village without purchasing that bike.

I bought the bike in order to turn it into a café racer. But, with the construction process and also influenced by my personal taste, this was how the bike was finished.

Before starting the modification of the bike, I designed and published the drawings on the forum Café Racer 351. The project and my drawings had a huge acceptance with other forum members. This acceptance led me to create a page on Facebook dedicated to the dissemination of my work. This bike is associated with the beginning of Capêlos Garage. I removed everything that was plastic. This was followed by the blinkers, the original seat and manometers. Everything considered to be ‘out of place’ was removed. The frame was shortened at the back and closed in a curve. The air box was replaced for the conical filters, which forced me to modify the carburetors to increase the entry of gas into the engine. The original front head light was a bit too much so I replaced it with a much smaller once. The stock blinkers were replaced with smaller and more discreet ones.

The braking modification on this Suzuki GSX400 Dented Brat includes the change of the original tubing which gave place to a steel mesh tubing, as well as new brake pads. The brakes are now slightly more sensitive, but remain as an old brake set. The original exhaust tips have been replaced by smaller ones without a silencer, which gives the bike a phenomenal sound.

When I stripped down the fuel tank I realized that the fuel tank had several dents. These dents made me question the original idea, which was to give the bike a raw look. Several people advised me to paint and remove the dents. However, my instinct forced me to keep the initial idea: a gas tank with a raw and naked aspect. The only painting on the fuel tank was a black belt at the bottom to dissimulate the curved lines, merging it with the black of the motorcycle. To me the gas cap in brass is the crown jewel of the fuel tank and is one of the details that I like most.

Initially it was designed as a café racer, the seat has undergone some changes compared to the initial draft which had a single seat hump in the back. At first I changed it to a tracker with a two person seat, but finally, with the evolution of the project, it became a single seat but with a little more of a ‘bobber’ look. I don’t know if that’s the correct term? Nevertheless, after I drew the seat I knew I had found the definitive version. Another detail which I consider relevant is the seat seam, which is longitudinal and not transverse. In my opinion the cross stitching would be against the line of the motorcycle. In addition to that, I ensured that the curvature of the seat equals the curvature at the back of the motorcycle frame.

My aim for the painting was also to check a very crude aspect, without much ‘bling bling’. This decision reflects my personal taste. So, I sent the motorcycle frame, the rims and some smaller parts for a paint job.

The stock handlebars and the mirrors were replaced with LSL. The rear mudguard was purchased at a fair of used parts and it has been installed with a LED rear light. Lastly, the side covers remained I never intended not to include them even when the project was destined to be a cafe racer.

I am very pleased with the final result, there’s only one thing I think that should have been changed which is the front section of the bike. I have plans to change it to a front of a bandit 400. It is a question of reliability and performance, based on the design the front will be more robust without altering the general line of the motorcycle.

The Suzuki GSX400 Dented Brat is fantastic in terms of riding and is fairly light and easy. This is not a bike with a lot of speed, it was never the objective. I decided to build a bike to ride and have fun and that’s what I have.

As for my business, it started as a hobby and so continues at this time. However, my intention is to open a commercial space for construction, illustrations and motorcycle design projects for people who have contacted me. In short, Capêlos Garage is a mixture of a garage, illustration and a design studio.

This custom build is a great first attempt from Nuno Capêlo, and is a glimpse into the future of Capêlos Garage Portugal. Good Luck for the next build Nuno!