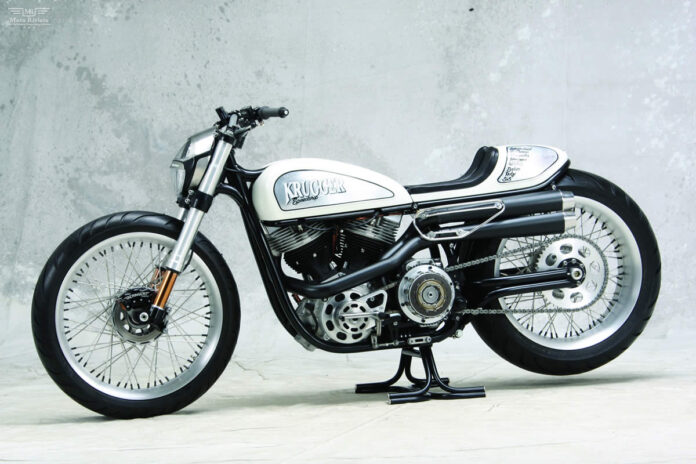 Today we are taking a look at one of his earlier work, from 2009 called ‘Overmile’. Also a competitor at the AMD World Championships, Overmile finished a respectable third place in the 2009 Freestyle Class.

Built as a tribute bike to the XR 750 which Fred Krugger says, is his favorite bike. Overmile is powered by a 103’ S&S engine and a flipped Baker 6 speed Powerbox, air ride shocks, Beringer In board braking and a twin scrambler styled stainless steel exhaust system.

Overmile is a retro looking motorbike packed with modern technology. The Gasoline is on the back fairing (2 gallons), oil tank is on the left side cover (0.8 gallons), air compressor, 25 amp battery and some electricals on the right side.

The frame and the swingarm are in-house fabricated by Fred Krugger. The bike’s suspension is helped by Fournales airride with integrated compressor. At the front Overmile features Öhlins front forks and a retro styled headlamp. Looking at the picture you will notice the seat of Overmile has been split in two.

Fred Krugger’s Overmile rolls on 21′ front spoked HD Wheels and HD 20′ rear wheels both wrapped in Avon tires. The bike was painted by El Cheapo in cream with Krugger written over in a silver finish. In the end what we have is a motorcycle packed with power and performance with a mix of Café, Scrambler and Retro Style.