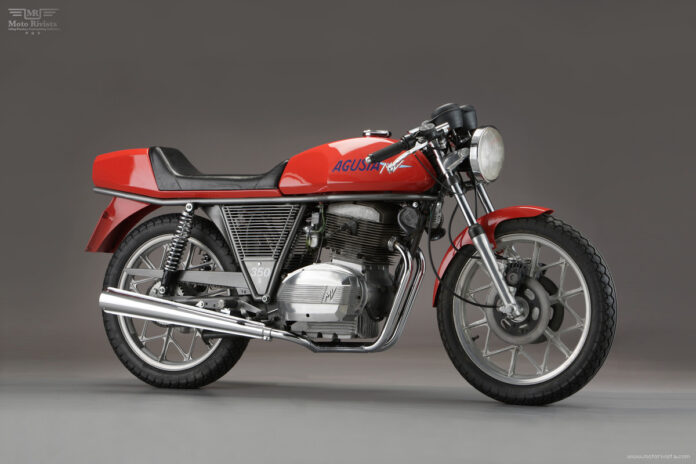 At the time the press at the Milan Motorcycle show were amazed by the prominent horizontal lines and sharp edges of the MV Agusta 350 Ipotesi. The Sport was characterized by straight lines on the engine and bodywork, with a side panel that mimicked the cooling fins of the cylinder.

MV Agusta 350 S Ipotesi entered production in 1975 quickly establishing itself as a desirable machine. The open duplex frame housed a twin cylinder engine, which was redesigned externally but retaining the proven internal of the preceding model.

The air-cooled two-cylinder engine was OHV operated in the head with two overhead valves via pushrods and rocker arms, oil sump and two Dell’Orto carburetor. A triple disc braking system was an unusual feature for a machine in the Ipotesi’s class.

The “hypothesis” was well known for the use of the MV Agusta 350 GTE electronic flywheel magnetos. The production of the MV Agusta 350 S Ipotesi ran from 1975 to 1977. There is no doubt about it, the design and the components of this Italian iron were ahead of its time.