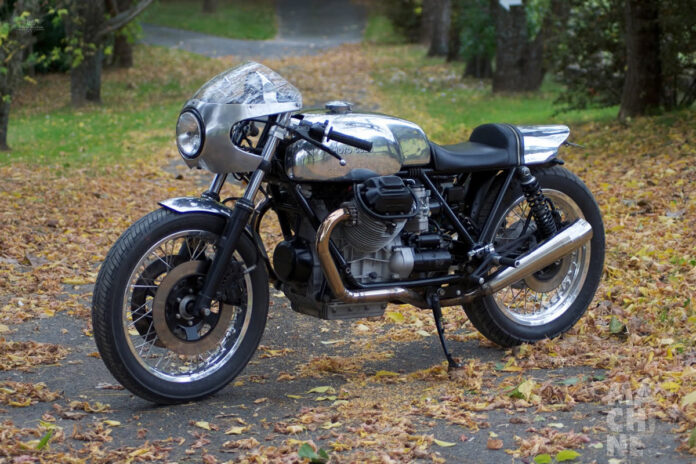 Matt from Machine is a builder who is getting constant wide spread attention with his versatile motorbike building style.

In a previous article we listed his Machine 50 Pan . What we have seen is a lot of motorbike builders stick with one style and build motorbikes with similar characteristics, that’s another reason we are a big fan of Matt’s, his versatility enables him to build unique bikes from a variety of different style. The motorbike we are talking about today Machine Moto Guzzi Mark 1 Le Mans was the winner of the best European at the Deus V-Twin Festival. Without a doubt this motorbike received a lot of attention at the festival, considering this is Matt’s first Cafe Racer that’s a fantastic achievement.

The Moto Guzzi Le Mans is a sports motorcycle first manufactured in 1976 by Italian company Moto Guzzi. During its lifetime it has gone through a series of changes which have meant that it is increasingly seen as a sports tourer.

Click here to take a look at the picture of what this bike looked like when it arrived at Matt’s workshop, the transformation is unbelievable.

When Matt bought the Guzzi the engine on Le Mans was already significantly customized, with a kit to boost up the capacity from 850cc to 950cc. The clutch and gearbox was tweaked by a Moto Guzzi expert Peter Roper. The alloy bodywork was hand crafted by Matt. The old front guard, dashboard, fairing, rear guard and tail section were rebuild from scratch and the tank was also modified. Matt was not happy with his first attempt at the tail section for the ‘Machine Mark 1 Le Mans’, so he started again, it took him awhile to get it right and the end result was exactly what he wanted.  Since the bodywork on the ‘Machine Mark 1 Le Mans’ was alloy the only paint needed was a decorative strip. The work on the rear seat with Zipper is beautiful.

In Matt’s words: “It was a fast bike before but it’s totally superior now. It runs better, shifts smoother, revs quicker, handles better and looks better I think. For those that have not ridden a Guzzi at 150kmh on the open road (as far as classic motorcycles go) do yourself a favour and hunt one down….you wont be disappointed”

Many thanks to Matt for doing such stylish modifications to iconic motorcycles from the 70s. Check out the video of Matt’s Moto Guzzi Mark 1 Le Mans.