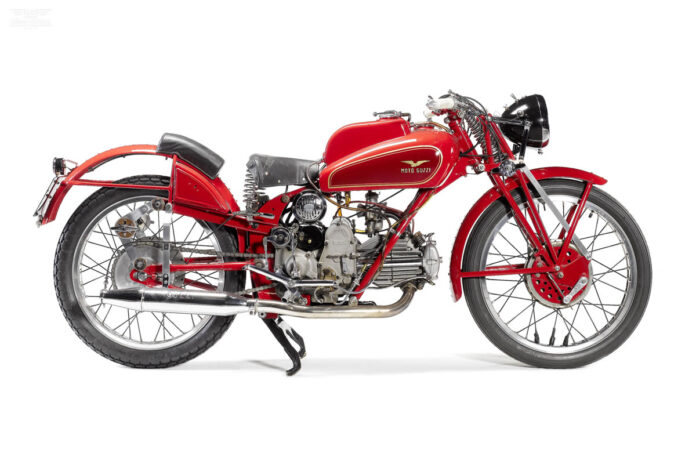 Throughout history Moto Guzzi has been the largest Italian motorcycle manufacturer. Moto Guzzi came to existence in 1920, when three friends Carlo Guzzi, Giovanni Ravelli, Giorgi Parodi who had served in the air corp decided to set up a motorcycle company.

Each had a different part to play, Carlo Guzzi was the engineer, Parodi was financing the venture and Ravelli was responsible for the promotion of the bikes with his racing proficiency. Tragically Ravelli was killed in a plane crash, Carlo and Giorgio kept going with their vision of a Motorcycle Company and adapted the air corps icon (an eagle symbol) in his honor.

Carlo’s first engine design was a horizontal single which dominated the first 45 years of the companies history in various configurations. By the end of the 1930s the flat single had established itself as a Guzzi hallmark. Through 1934, each engine bore the signature of the mechanic who built it. In the 1935 Isle of Man TT Moto Guzzi factory rider Stanley Woods achieved a striking double victory in the Lightweight TT as well as the Senior TT. Moto Guzzi’s first attempt at a customer race bike was the pre-war GTC, a development of the GTV, which although reliable was handicapped by its roadster origins. Then in 1939 Moto Guzzi appeared with the Condor a 500cc production racer motorbike, after the war the Condor was nicknamed Dondolino (rocking chair).

The layout of the engine was the same as that of all the Guzzi models. It was a horizontal single cylinder engine block with an outer lying flywheel that had a diameter of 280mm and weighed 8.2kg. In 1939 Nello Pagani won the Circuito del Lario on a Condor. He was up against the new four-cylinder Gilera Rondine which produced 85 bhp, about three times as much as a Condor, but the Gilera was much less maneuverable. Moto Guzzi produced a  total of 69 Condors prior to the cessation of production in 1940.

This particular rare pre-war 1938 Moto Guzzi Condor came with the letter from the factory (dated December 1993), it was manufactured in 1938 as a GTC/L for Italian highway patrol police. The bike was finally sold to Moto Guzzi’s distributor in Ethiopia in December 1939. Then in 1990 the current vendor discovered this Moto Guzzi Condor in India, it was taken there by returning British forces after Italy’s defeat in WW2. The Guzzi Condor was purchased from it’s previous owner an ex-Indian Army artillery officer Captain Joshi, who also revealed that this bike was previously owned by the Maharajah of Patiala.

This Moto Guzzi Condor features an aluminum cylinder barrel and head, magnesium crankcases, engine covers and hubs/brakes, and 21″ alloy-rimmed wheels, all these parts were hallmarks of the unusual Condor production racer. This Moto Guzzi Condor has almost certainly never been raced, and it has retained all its original road equipment – lights, toolboxes, kick-start, baffled silencer, etc – these would normally be stripped off for competition.

The bike was taken back to the UK and was completely restored in the early to mid 1990’s, later the machine was taken to Moto Guzzi’s home at Mandello del Lario in September 1996 for the their 75th anniversary celebrations. This beautiful piece of history was then auctioned at Bonham’s on 25th of the April 2010 and was sold for £41,100.