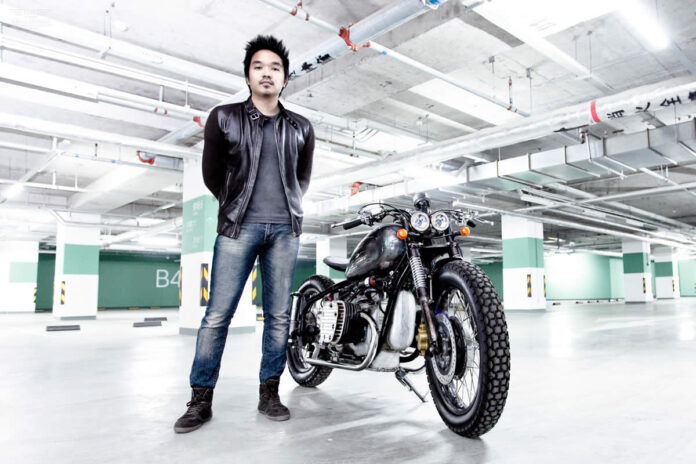 Passion has no boundaries or limit and when it comes to custom motorbikes it’s everywhere, including China. I did say China and yes they do customize motorcycles!

Today’s article features another piece of art from Bandit9 a Chang Jiang called ‘Magnus’. Bandit9 is owned and operated by a passionate custom motorbike builder Daryl Villanueva. With a far better understanding of the custom motorcycle scene in China than we do, he has taken the time to explain to us how things roll in China and the ins and outs of his build ‘Magnus’! Over to you Daryl… “There’s a certain stigma with products that come from China. By designing great innovative bikes, we hope to clear the Bandit9 name from that. We want to propel Bandit9 beyond the motorcycle world and into art and design. We believe the birth of Magnus, a truly reinvented Chang Jiang, is the first step in that direction.

The Chang Jiang cannot get any lighter than Magnus, it has no fat. A Chang Jiang with a sidecar can reach impressive speeds but with our minimalistic approach to Magnus – It is fast. We designed Magnus to be more agile by ensuring the tank and seat flow nicely; we removed the backseat and fender; trimmed the air filter and repositioned the electric box to sit below the seat. It is slim and aerodynamic.

Being in China, we are aware of the number of copycats so we had to do something very special about the color. Magnus was not painted. The tank, frame and forks were all lit on fire with a blowtorch. The result is a beautiful organic pattern on metal; it’s as if the bike is made of stone. We also fitted Magnus with chrome details – spokes, exhausts, front and back suspension, speed dial, and the seat suspension. It gives the bike that extra touch. An elegant finish.

The twin lights give Magnus a lot of personality. I don’t think I’ve ever seen a Chang Jiang with twins before. The gas cap is another distinctive element. We used an old crankshaft and redesigned it to function as the gas cap. It’s hard not to play with it when you’re stuck on a red light.

Magnus has gotten Bandit9 a lot of press both from the motorcycle world and the art industry. People around the world are beginning to appreciate our mission to end the “Made in China” stereotype by collaborating with Chinese craftsmen to build the coolest custom bikes in the country. Bandit9 is still a young company but with all the support we’ve received, the future’s looking bright.”