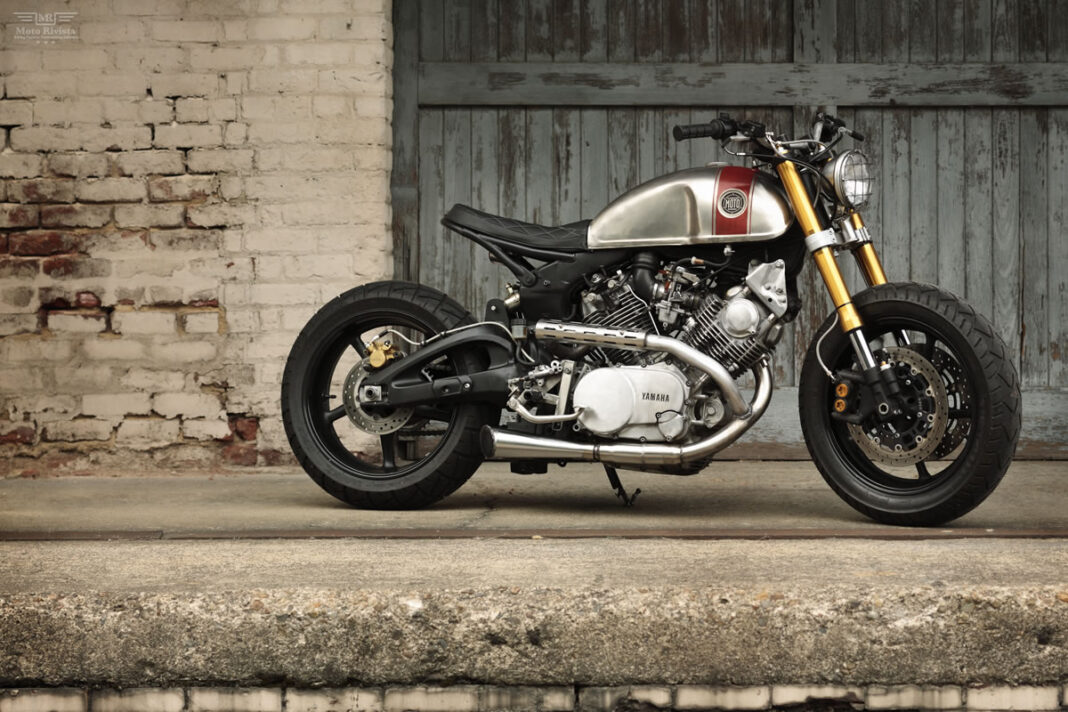 For all those who crave custom motorcycles and don’t want to look at modern stock bikes, today we have something special! Classified Moto’s custom Yamaha Virago XV920R built by John Ryland’s custom workshop in Richmond, Virginia which specializes in affordable alt-moto customs and random creative expressions.

Taking trash and turning it into a piece of art isn’t something every one has the creativity to execute. Classified Moto create unique recycled motorbikes that transcend their humble beginnings. We have watched and admired John of Classified Moto’s work for some time now and we are excited to be able to take a closer look at his build XV920R.

The foundation of this project is a 1982 Yamaha Virago XV920R, a chain drive model. According to John “They’re actually pretty rare here in the US, but we’re lucky enough to have found a few of them. The 920R (called the TR1 in Europe) is the sportier sibling to the Virago, which typically came with a shaft drive. Very little of the original bike remains. During this project, we swapped the front end for one from a late model Yamaha R6R and the rear end from an R6S. This included the modern wheels. We had to do a lot of fabrication and welding on the swing arm to get it to work with the XV frame. The frame itself was modified somewhat, including a gusseted notch that allows proper travel, as well as a notch to allow adequate clearance for the rear cylinder exhaust. The battery was mounted in front of the swing arm underneath the bike. We also welded seat supports to the frame, which were custom fitted to the owner’s height. Most things on the bike were modified or made from scratch including the seat pan, foot controls, front sprocket and triple trees. We first used a rear shock from a Triumph Daytona, but eventually opted for a 1980’s Honda CR480R unit that gave us a better ride. We ended up having an issue with first gear so we opted to swap out the lower end instead of rebuilding the transmission. We also did a complete starter system upgrade using the Bendix-type setup from a 1985 XV1000. This permanently solved the notorious XV starter grind. Starts right up every time now with no ugly noises. Other than that, no internal engine work was done or required.

It took us a long time to develop the rear end conversion, and the bike was up on blocks for weeks while we measured and re-measured everything and designed the swing arm components. One of the best parts of the build was when the swing arm was completed and we finally had a rolling bike that could support it’s own weight. It’s really hard to know exactly how it’s going to sit when you’re using blocks of wood, jacks and straps. It was awesome to see that all the trouble was worth it.

There were plenty of problems during this project. We had trouble with a couple of platers before finding one who could handle the job well. We nickel plate a lot of our parts, including the tanks, so they won’t rust. That was a long process, but we’ve streamlined it now. Also, realizing that first gear was bad was no fun. We had run the bike through the gears on the center stand and everything worked great. But under load, it made an awful noise. We were lucky to find a bottom end for it, but we had to drive to South Carolina to get it — 15 hours round trip. Finally, getting the wiring correct when replacing all the starter components proved to be a major hassle. But again, now we know, so the next one will go quickly.

Most of our bikes are a bit rough around the edges. That aesthetic has always appealed to me. I’m not enough of a craftsman to be able to do a perfect paint job or shape a flawless fairing. I like to look at those bikes, but it’s not my style. I always loved the movie Mad Max (the original — they got kind of silly after the first one, I think) and to me, there’s something really cool about that post-apocalyptic look. Not all of our bikes look so rough, but they all have some Mad Max in them. They’re all pretty stripped down and basic, which I love. And they’re all genuinely recycled. We use as many used parts as we can and often cut up old handlebars and other pieces to make seat rails, brackets and mounts. The headlight screen was made from old spokes, for instance. As far as other influences in the motorcycle world, there really wasn’t one in particular for this bike. I love the idea of Supermoto bikes and this one feels a bit hooligan when you’re riding it. As always, Wrenchmonkees and Shinya Kimura are huge influences and have really helped shape the way we work.”

Special mentions must go to John’s go to people; Greg Ownby, mechanic. Mike Benini and Bob Kitson of Maxum Machine, fabrication. Adam Ewing photographer, he makes all the bikes look their best. Last but not least John’s wife Betsy who according to John she “handles a lot of stuff around here, including finding the bottom end in South Carolina. She’s a lifesaver.”

Our special thanks is to John for taking the time to tell the story of this Yamaha XV920 for us. Anyone who can take something with an old story and give it a new one is an inspiration to us. We love the bikes, we love the lamps and we cannot wait to see what is next for Classified Moto!