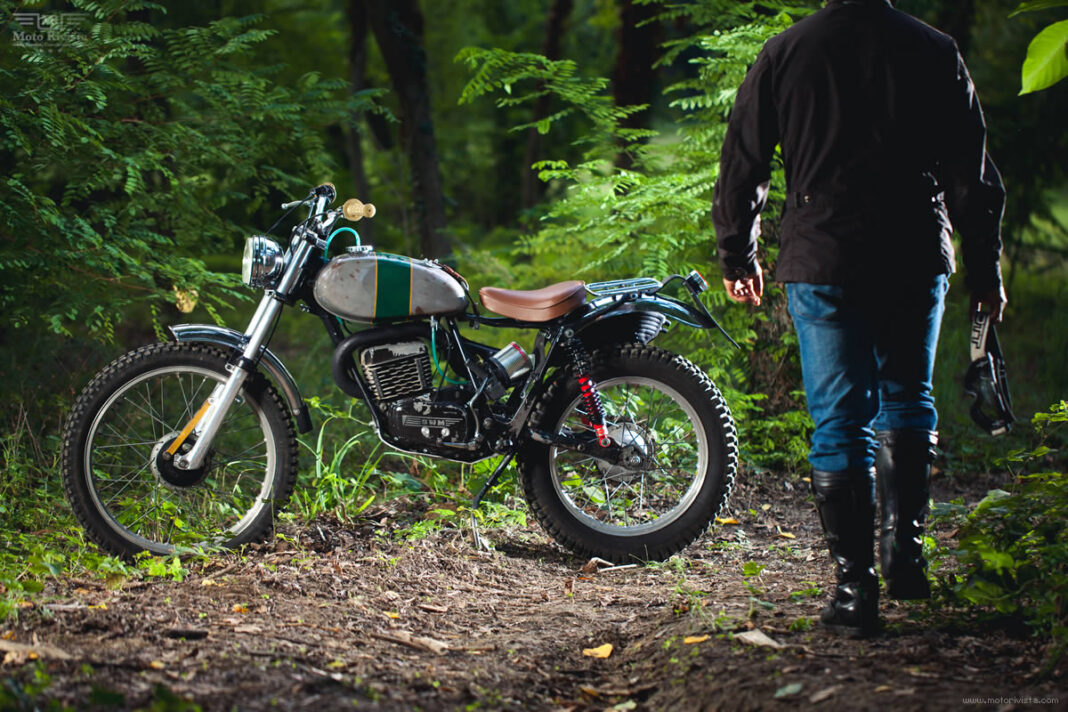 Here’s something new a classic Italian custom SWM TL320 motorcycle built by Lorenzo Buratti of Italy. Every now and then we are gob-smacked by Italian craftsmanship, I think there must be something magical in Italy’s water.

To give you a little flashback, SMW was founded in 1971 by Piero Sironi and Fausto Vergani and was based in Milan, Italy. SWM manufactured Observed Trials, Enduro, Motocross and off-road motorcycles.

According to Lorenzo “Since I was a kid my entire life is all about racing, with bmx bikes and then off road motorbikes. My life was about the grab of a handlebar, motocross and enduro racing in Italy and some rally raid race in Africa such as Dakar or Pharaons rally. I grew up watching my older brother racing go karts so I started very early to spin wrenches for him at the box and smelling the two stroke engine fragrance.

As the same time my uncle was a great fan of road racing so I had access to a lot of racing stories about Kenny Roberts or Randy Mamola. Growing up in a family like this gave me a great background and acknowledgment about speed and competition, but also kept me well focused to imagine the romantic motorcycle era. When I’m building a bike I have in mind low technology and lots of creativity mixed with the good old days classic style. Everything started some months ago, a friend of mine let me take a look in his garage; two identical SWM trial bikes were there and had been for a lot of years. After the first look I had everything ready in my mind and those bikes were perfect to realize my idea, take the best parts out of them to build a new scrambler bike. I was searching for a cheap bike to teach my 17 year old daughter to ride. We live between country and hills so I needed a light and maneuverable scrambler for her, with a low seat making it perfect to ride in the woods at low speed. After years of enduro and motocross racing, in this moment of my life I most enjoy riding more quietly on the trials, with no hurry and I’d like to transfer these emotions to my daughter.

Obviously the love I have for classic bikes came out immediately, so I just put some details I found at swap meets like fenders, lights, backpack holder behind the seat and an old Motobecane fuel tank. After some tests with different parts and layouts I think I found a good balance between purpose and style. The air filter cover is a real tomato can, obviously inside there’s a real air filter, but I like this funny idea as does my daughter, so she decided to paint “Buratti Tomato Co.” on it. The rear fender originally was the front fender of a Kawasaki Z900, reshaped with a hand grinder. The foot pegs are taken and adapted from an old motocross bike, more comfortable than small original trial pegs. As you can see there’s no new paint on the frame and engine. I like to have a bike that carry’s on signs of the times but also with a good amount of work hours on it, so it features polished aluminum forks, new shocks and seat, new handlebar and levers. Sand blast the fuel tank, add some days out of the garage in order to have some rust grow up, a simple green line with spray paint and then cover everything with glossy transparent paint and you have an old looking paint job.

The biggest challenge during the build was to keep the balance between the lines, handling, seat position and stuff like that. Trial bikes are very very technical and transforming them into something different and more comfortable to ride is not so simple”

Building custom motorbikes is Lorenzo’s passion but his main business is to make one off home furniture for bike junkies. I am already a fan of Lorenzo’s motorbikes and furniture, I will be keeping an eye out to see what he comes up with next!