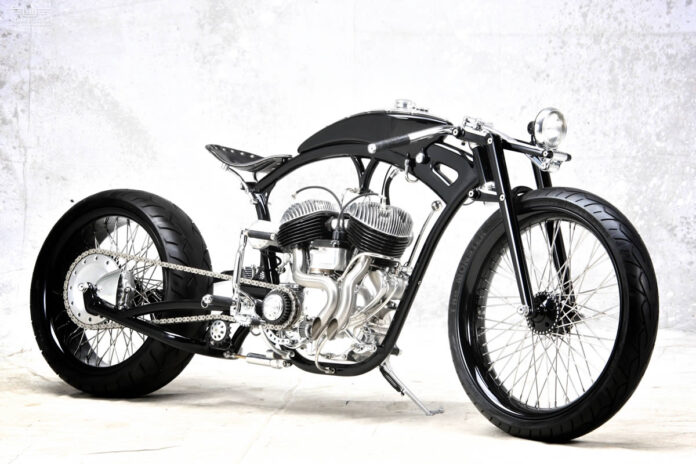 Christian Dotson’s Aileron was named Americas most beautiful motorcycle at the National Roadster Show, before going on to compete at the 2009 AMD World Championships of custom bike building. The result was a respectable 7th place in the freestyle class.

Christian has a background in automotive design and hot rod construction. Whilst Christian has always been interested in anything with wheels, his passion for motorcycles developed during his youth. Christian purchased his first bike a 1989 Suzuki GSXR1100 while in college. However it was a basket case chopper project with a 1978 Sportster engine which really sparked his interest in custom bike building.

Aileron was the second show build by Christian, his first custom bike build was called Swingshot. This bike was also named Americas most beautiful motorcycle at the National Roadster Show and competed at the 2007 AMD World Championships, finishing 10th place in the freestyle class.

Lets get to the build, The parts of the frame and front end of the bike have been constructed using radius arms from the front suspension of 30’s cars. For this build Christian wanted to blend modern sports bike design with vintage board track style. To give the bike a board track flavor Christian decided to use an 84ci Indian flat head motor, which was reproduced in California by Kiwi Indian. The engine breathes through a Mikuni carb and has been fitted with a custom set of brushed stainless steel pipes, while the spark plugs are ignited by Morris magneto, this alleviates the need for a battery on the bike. Supporting the engine is a four-speed Indian transmission and clutch assembly from Mike Thomas at Kiwi Indian.

The frame, which wraps around the engine has been put together by Christian. Whilst the distance from the top of the frame to the engine is not close enough, this is a deliberate design element to put the seat in a certain position in relation to the position of the foot pegs and the bars. With this Aileron mimics the riding position of a Suzuki GSX-R, and the result is quite a comfortable ride.

The seating position is not only unusual on this bike, the rear suspension is mind-boggling. The tubular swingarm is suspended on a single quarter epileptic leaf spring mounted on the left of the frame. This style of suspension is derived from ‘suicide’ style front ends of hot rods.

Blending the car and bike technology also takes place at the front of the bike, where Christian designed his own girder fork. With the size of the wheels another place where you can see a fusion of board track and sport bikes. The front features a 23-inch wheel wrapped in a 120-section tire.  The single brake is another modern touch from Christian, the rear wheel being stopped by an ISR six-piston caliper and sprotor.

The gas tank features two caps with one for gas one for oil and guess what? it’s not a split tank. The oil filler cap allows the oil to flow into the frame tubes whilst the tank is just for gas. Also in the frame tubes is a stainless steel conduit tube which allows the wiring to be hidden away. Aileron is an astonishing accomplishment by Christian, which shows a class standard of engineering and design. Looking at the finished bike details there is no doubt Christian is a talented motorbike builder.