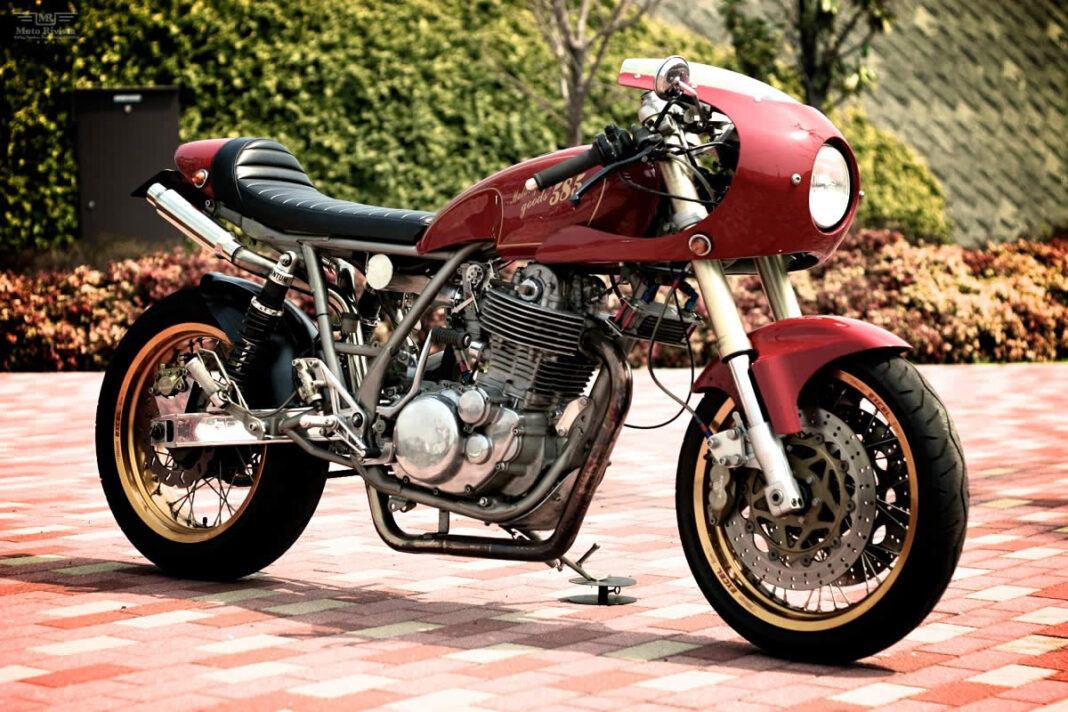 Recently we featured for the first time an amazing Kawasaki W3 from Motor Garage Goods, Japan. What we also discovered was they have an extensive portfolio of motorcycles worthy of a Moto Rivista feature.

Hiro or the ‘Boss’ of Motor Garage Goods is not only a passionate motorbike builder; he is humble and helpful with our pursuit to showcase his bikes. Whilst we don’t have as much information as we would like about the build process, the images tell the untold story! Ok…on to the motorcycle, for today’s feature we have picked up their Neo Cafe Racer SR585. The base for the build of Neo Cafe Racer was a stock Yamaha SR400 that was modified extensively. The stock engine was modified and bored up with Kanrin kit and was fitted with a Keihin Carburetor. Neo Cafe Racer also features a one off twin silencer exhaust system made by the good guys at Motor Garage Goods.
At the front the bike features genuine Kawasaki ZXR front fork and Brembo twin front brake. At the rear Neo Cafe Racer houses a genuine Yamaha XJR swing arm and Quantum rear suspension.

Mr Tanigawa is the proud owner of this beautifully crafted Neo Cafe Racer and must be having the time of his life riding this beauty around the block! We are on the quest to feature more custom Japanese Motorcycles, stick around for more from the land of the rising sun.

This article has been weeks in the making with dozens of emails back and forth with Hiro. We hope that we have got it right and the details haven’t been lost in translation. Thank you Hiro for persisting and allowing us to showcase your bike to the world!