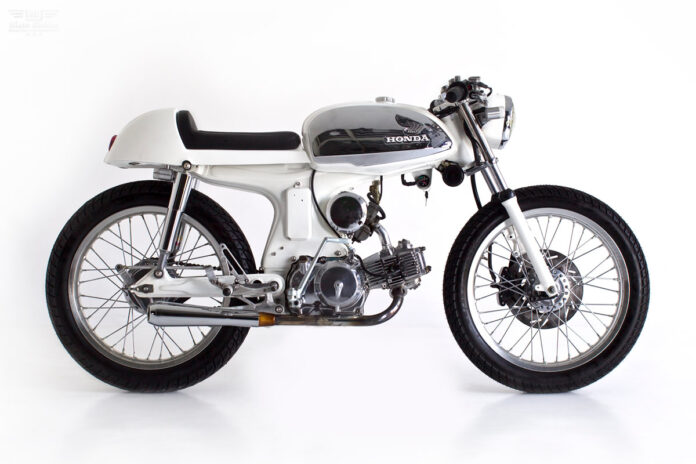 Deus Ex Machina has taken a classic Honda Sport 90 and transformed it into a sleek sexy Café Racer. If you’re not in rush to get to get somewhere, the Honda S90 will get you to your destination in one piece!

The Honda Sport 90 aka S90 was produced from 1964 to 1969 and was based on the Honda Super Cub. It featured a single cylinder OHC air-cooled 90cc engine with a four-speed transmission.

According to Deus “We here at The Temple get so full on with custom orders that we seldom get the “Project Bike” time any more. But when Mustang wheeled in an early 70′s tore up Honda S90 and announced to the crew that he had an idea, we knew it would be a good one”.

The build started with tearing down the stock Honda Sport 90 to the bare bones and a forged Café Racer Seat was added. The stock engine, carburetor was overhauled and all the shiny parts were polished up. This custom Honda Sport 90 Café Racer also features one-off built and polished clip-on handlebars and is coated in classic white paint. The ignition was converted from point to CDI, Deus Ex Machina added a custom Japanese exhaust, loud enough so you can hear it coming!

At the front this beauty features KTC small switches, Daytona speedometer built into Suzuki GT front headlight while the rear houses a Polaris taillight. The finished Honda Sport 90 Café Racer rolls on 18-inch front and rear TK Japanese wheels. A fantastic classic build from Deus Ex Machina, I would love to take this beauty for a spin any day.