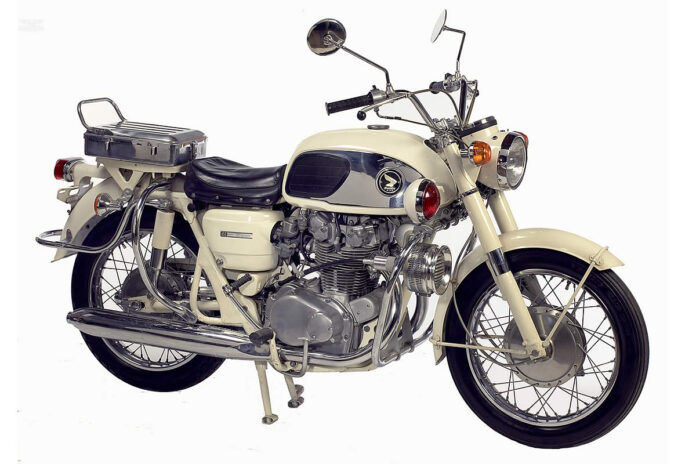 This 1965 Honda 450 Police Special is an absolute beauty. Back in the 1960s if you saw one of these rare motorcycles on the road flashing its red lights, get your license and registration ready the men in blue are on your tail!

The 1965 Honda CB450 Police Special arrived in to the United States in very limited quantities, only 25 units to be exact. Back in those days the men in blue had 1000cc plus of engine displacement, which makes Honda CB450 a tough choice. But this police special had some clever anti-crime devices.

The Honda CB450 Police Special is powered by a double overhead camshaft 4-stroke engine, which produces 43 horsepower. Back in those days this bike was the only DOHC motorcycle in production.

This 1965 Honda CB450 Police Special has the world’s first jeweled police motorcycle speedometer. The large speedometer was calibrated in 1-mile-per-hour increments. By just the flip of a switch, the men in blue could lock the speedo reading to preserve the evidence of your reckless driving.

A penetrating siren is mounted on the front safety bar, which is activated by pulling a lever fitted on the left handlebar.

The first U.S. shipment of 25 was also the last. Honda 450 was not able to set their roots in the US market and was dominated by American V-twins. Back in the 1960s this bike would only cost $720, but having only 25 of these left around we will let you guess the price for this beauty?

Special thanks to MotArt for finding this beauty.