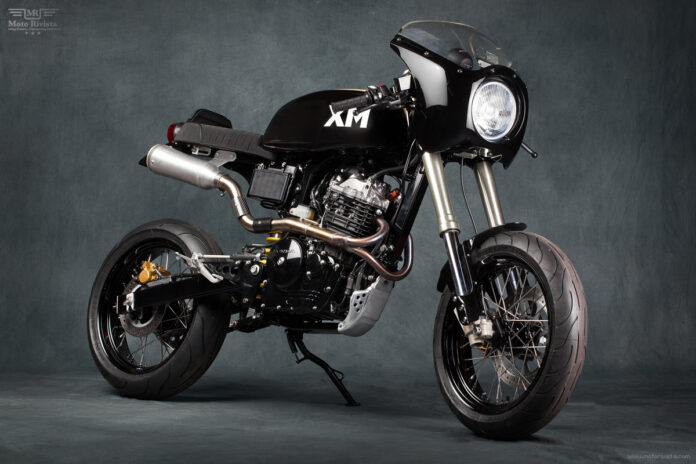 This special custom Honda FMX 650 aka XMR Black is the conceptual evolution of the eldest XM created by Mr. Martini in 2011.

It differs from XM for the starting bike is no longer a Honda XL600 but a Honda FMX 650. Using a sportier bike as a base with 17 inch rims, Showa suspensions upside-down and a more aggressive engine. The objectives of Nicholas is to create a charming cafe racer starting from an “average” bike and transform it to be more attractive and special. Given the success of the first version (the “XM”) Mr. Martini maintained many original parts of the bike including wheels, engine, suspension. But made other aesthetic evolutions with half handlebars and pulled back footpegs, making a more sporty driving position and with loaded weight forward. Also in this case, the tank comes from a Trident Triumph of 1970, the headlight from a Harley FatBoy incorporated in a very aggressive fairing.

The most amazing change one this custom Honda FMX 650 is the new seat. Usually in all cafe racer bikes the tail is very short and there is a single-seat, Mr. Martini built a rear frame and invented a new seat with an ingenious locking system that in a few seconds becomes longer to accommodate a passenger on board!

The black color makes the XMR a motorcycle-style cafe racer, aggressive, sporty, with an emblematic name: XM as a size of clothing that doesn’t exist (extra medium) with the addition of the title “racing” to confirm that a “medium” bike can change into something special and unique. This custom Honda FMX 650 is not only beautiful to see but also functional as they are all special bikes created by Mr. Martini.

Special thanks to Mr Martini for allowing us feature his custom XMR Black,  to find out more about Mr Martini’s builds please visit his website.