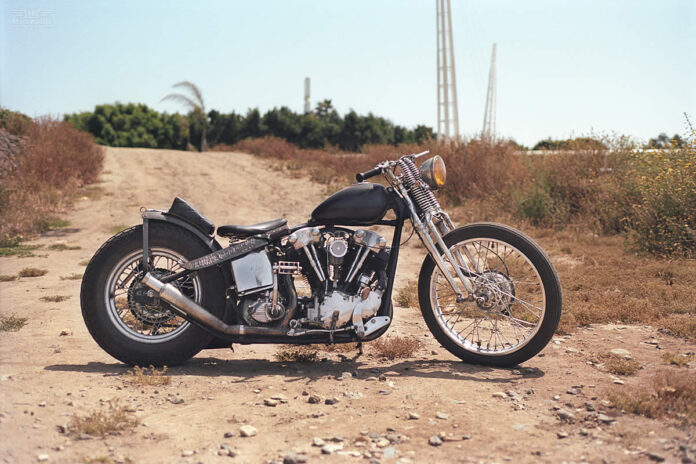 Old Gold Garage Co in Ventura, California specializes in Hot Rods, Customs, Choppers and parts. In charge is ‘Dapper’ Dan Collins who has turned out some pretty awesome machines from this garage.

Dan’s skills don’t stop there though we hear he is also quite a damn good Tattoo Artist and along with Grant Reynolds runs Victory Electric Tattoo Co.

The Velvet Hammer is based on a 1945 Harley Knucklehead EL stroke motor (80” UL Flywheels) mounted on an early Panhead Wishbone frame. Dan did some modification to the frame by shaving and molding it. The tuna can shaped air cleaner is from Old Gold Garage and the Linkert carburettor was built by Kiyo at Garage Co. This custom Harley Knucklehead also features Old Gold Garage stainless TIG welded drag bars. Our personal favorite is the S&M foglight, the tailgunner taillight and the Old Gold Garage brass foot. The original Wassel tank on this mean knucklehead comes from Dan’s 51 BSA barhopper. For the rear fender Dan used a ’36 ford spare tire cover, which is a great look for this bike.

When you look at the pictures of this custom Harley Knucklehead you can see the past written all over it. Dan has used several old school items on this bike to capture the true vintage spirit including, the original Bates seat pan which was found at EL Camino swap for $5 and was restored to it’s original glory, $5 diamond P pad and a 39 knuck cam cover. Dan’s right hand Gordon Chappel did the wiring and got this bike running.

In the end what we have is a kick ass old school Custom Harley knucklehead – ‘The Velvet Hammer’. The lines of this bike are as sharp as that machete and it has got a perfect Ghost rider look, straight from hell. One of the finest examples of a knucklehead we have seen and beautifully captured by photographer Michael Schmidt.