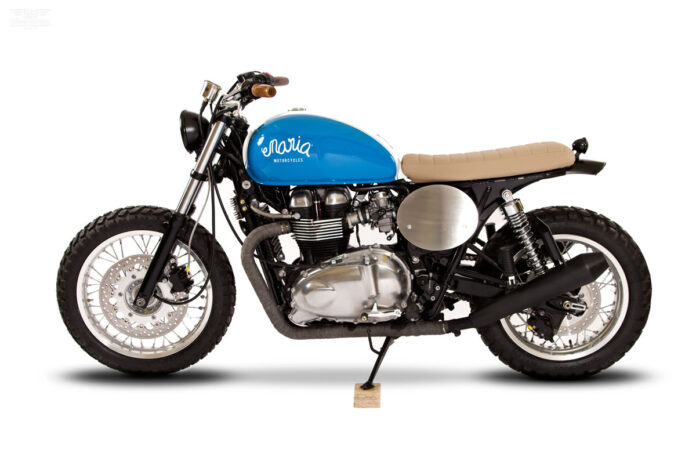 It’s not that hard to recognize a Triumph Thruxton on it’s own, put a bunch of Thruxton’s together and no one can guess which one is ‘Jacks’ bike.

What’s missing in ‘Jacks’ bike is that mark of individuality. He needs that essence of custom flavors and what better place then Maria Motorcycles to get it all. Maria motorcycles is a Lisbon, Portugal based custom shop breeding one-off custom motorcycles for the enthusiast. For today’s feature we are taking a look at their Custom Triumph Thruxton “Mighty Blue”.

According to Maria “One of Maria’s members had bought a 2010 stock Triumph Thruxton and wanted to give it a new approach, something more Maria Style!

He was tired of the Thruxton driving position and wanted it to have a more comfortable and relaxed driving feel. The large tires and the all terrain look, were a starting point to give it a more radical and extreme overall visual. The first thing to change was the handlebar and all the original controls, mirrors and instruments. We needed to clean this part of the bike, and give it a more simple and lower front. Then we added a smaller headlight and painted the handlebar in white. Normally this is a part that no one cares about, so we thought for this bike that could be a change. The rear of the bike’s frame was chopped to give it a short and massive look; a custom smaller black mudguard with taillight completed the rear look.

We also decided to get rid of as many chromed parts as we could, so we painted all that was possible in black. The exhaust system got some straps and heat resistant paint on the mufflers.

The tank of this Custom Triumph Thruxton received a new paint job, which was inspired by old school NASCAR race cars. In the beginning we decided to put numbers in the side plates, but then we cut them in stainless steel instead, we kind of like them with the natural metal texture at sight.

The seat was custom made to give it a slim look, and smaller than the original. The color was important too, to give a dirt and desert appearance. The stock Triumph Thruxton engine was in good condition and didn’t needed any work other than a tune of the injection and we got rid of the filters”.

Lastly the tires are large Heidenau K60 and work well with on and off road adrenaline rush. The finished Custom Triumph Thruxton is a another outstanding yet simple build from the boys at Maria Motorcycles, sure we will see more from Maria soon!