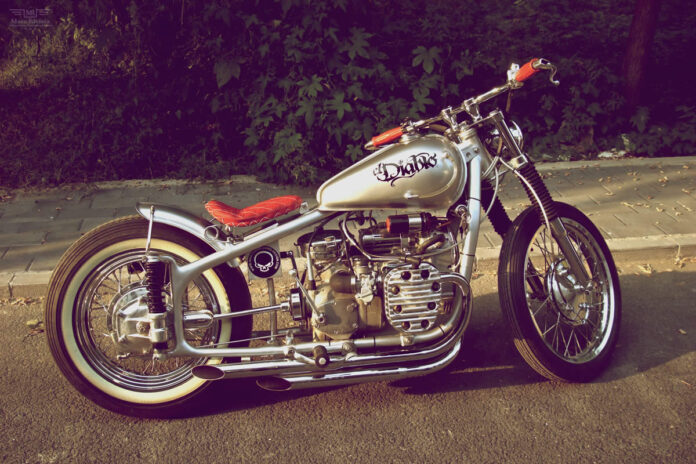 It wasn’t that long ago we featured our first ever customized Chang Jiang ‘Loki’ by Bandit9 and today we are pleased to be able to take a look at another one.

Thomas Koehle is another foreigner living in Beijing who about 4 years ago started customizing Chang Jiang’s. His workshop ‘4444 Chang Jiang Design’ is more a hobby than a money making venture. He does sell the occasional bike but tells us if he was to count the hours he works on the bikes they would be way too expensive!

Facing what seems to be common challenges in China according to Thomas “Of course the customizing scene here in China is pretty poor – not many people work on ‘real’ customs but just on changing colors and things. Parts are hard to come by – although a lot of the customizing parts sold elsewhere are produced in Taiwan – not so far but still difficult to import from there” Read on to find out how Thomas gets around this! The bike is a Chang Jiang 750 and is called ‘El Diablo’. Thomas was aiming for a 70’s/80’s Bobber/Chopper style with some British influences and metallic paint.

According to Thomas “Those small 24hp engines are pretty reliable so except opening and cleaning with some polish I left it untouched. The only mod I did on the engine is the use of Mikuni carbs.” The hand made exhaust was relocated with both pipes on the right side and according to Thomas the bike sound awesome.

The frame was sandblasted and re-welded, Thomas also made the hand fabricated ribbed-tailfender which was made out of an old plain fender. The handlebars and the seat were also handmade. Thomas also tried to give it a low and stretched silhouette; therefore he placed the seat pretty low. The custom tanks with gasoline-gauge made from tube were imported and the battery box was also relocated.

So how did Thomas obtain all the imported parts he used for this build? including tank, raisers, grips, frontlight, tailrim, speedometer. Easy he imported everything from Europe in his suitcases or as oversize luggage. He tells us it took a lot of time to get all the parts he needed and he received some very interesting looks from the customs guys, they must have been wondering what he was going to do with all the parts!

The answer is simple he was going to transform this old and tired Chang Jiang 750 into ‘El Diablo’ a beautiful piece of rolling art. Love your work Thomas we look forward to seeing what else you can produce!