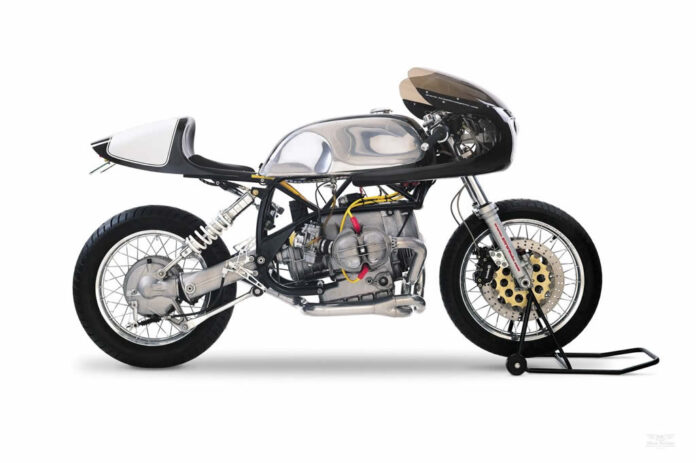 Gregor Halenda purchased this bike for $940 back in 1992. ‘The project started with a wicked 70mph tankslapper, which nearly destroyed the motorbike. The shocks were pulled apart with the subframe, and the bike went quite a ways on the cylinder head (through actually). Leaving only wheels, forks and the engine for the project’. Says Gregor Halenda New frames, paralever and transmission were taken from a ’92 R100GS, then Scott grinded off all the brackets, tabs, mounts and extraneous metal bits making the frame lighter and stronger. The Engine on this BMW Boxer was tuned slightly, balanced at 9.5:1 compression ratio, a 336 BMW sport cam, 44mm intakes, titanium retainers, dual plugged, 40mm Dellortos and running a tranny, clutch and flywheel from a ’92 bike. The complete engine in the rolling chassis has the bike weighing 306 lbs. With a 50/50 balance Team Incomplete was thrilled. Scott Kolb is the man behind the scenes who made this BMW Boxer what it is today.

The rear sets are Pro-Tek’s to fit a Suzuki GSXR and the top clamp (as well as the entire fork assembly) was from an early Ducati 851. The tank is from The Tank Shop in Scotland, the tail-section is a Harley KR750 from Airtech, and a heavily modified front fairing from a Laverda SFC. The Exhaust came back from HPC and fit perfectly to the bike.

The finished bike is a perfect Cafe Racer transformation, what we love most about this bike is that Laverda SFC fairing and that BMW Engine.