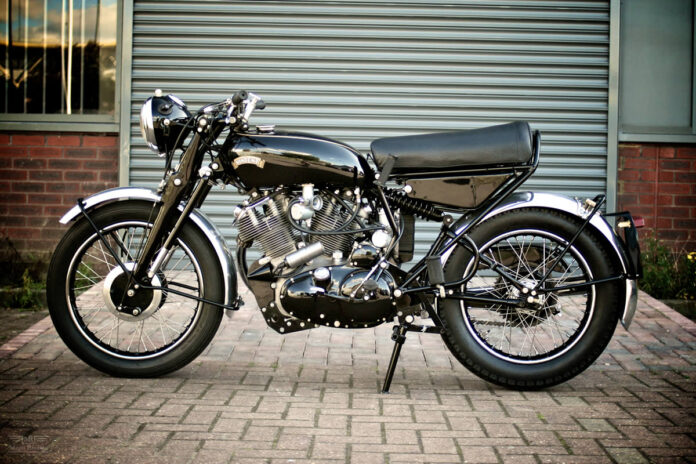 Vincent Motorcycles was a British manufacturer and also the makers of world’s fastest motorcycles in its era. In 1948 the Black Shadow was the worlds fastest production motorcycle.

The Vincent Black Shadow was a hand built motorcycle and was first introduced in 1949. By 1954 Vincent sales were on its last legs, so Vincent introduced three new models known as the Series-D line. The Black Knight was an upgraded Vincent Rapide, which was fully enclosed to keep the rain and dirt from the rider, the Black Prince was a full fairing described by it’s designer Phil Vincent as a ‘two-wheeled Bentley’, Vincent Victor was an upgraded comet. Black Shadow Series-D innovations included a new frame and rear suspension, a steel tube replaced the original fabricated upper member/oil tank while the paired spring boxes gave way to a single hydraulic coil-spring/damper unit offering a generous seven inches of suspension travel. In place of the integral oil reservoir there was a separate tank beneath the seat. The user-friendly hand-operated center stand was a welcome addition, and there were many improvements to the peerless v-twin engine including coil ignition for easier starting and Amal Monobloc carburettors.

Series-D was Philip Vincent’s finest creation and he promised that Vincent parts would always be available which they are to this day.  A week before Christmas in 1955 the very last Vincent came off the production line and was labeled ‘The Last’, Vincent shut their doors leaving a heritage of automated, state-of-the-art, fast and remarkable motorcycles.

When the world was at the War men like Philip Vincent were innovating and crafting machines as good as this Series-D Black Shadow.