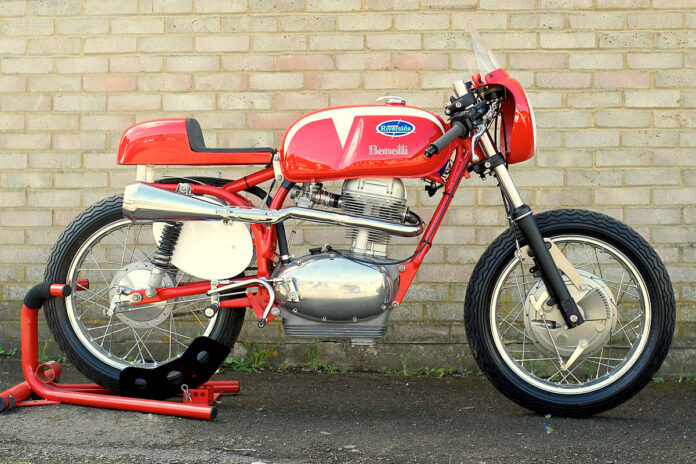 By the end of 1960s the rise of Japanese manufacturers caused a major crisis in the European motorcycle industry.

Benalli the original company was heavily involved in the American motorcycle market, they were selling motorcycles under 350cc through Montgomery Ward . Montgomery Ward was founded as the world’s #1 mail order business in 1872 by Aaron Montgomery Ward. Montgomery Ward (later known as Wards) sold various mopeds, motorcycles and scooters, including Motobecane, Lambretta, Mitsubishi, Bianchi and Benelli, the latter’s products being marketed under the ‘Wards Riverside ‘ brand name. The arrival of competition from Japan led to Benelli losing its popularity, as they were perceived as old-fashioned in comparisons to Honda’s of that same era, which sported overhead cam engines with electric starters.

The Benelli you see here is believed to have previously formed part of a private collection in Ireland before it was sold by a dealer in Southport. The machine was then stripped down and completely rebuilt. The front end was discarded but the original frame, swingarm, tank, rear hub and the Benelli 349cc engine was retained.

‘New-old-stock’ Paoli forks were fitted and the taper-roller head bearings were modified to suit the look of the bike.  The wheels were rebuilt with 18-inch alloy rims and stainless spoke/nipples shod with ‘new-old-stock’ Dunlop ‘triangular racing tyres. A Grimeca 4LS front brake was acquired for this build, new clip-ons and control leavers were fitted with Sebac shock absorbers. The bike also features Norton rear-sets, Elliot rev counter and Boyer electronic ignition.

We just added this Benelli to the list of bikes we wouldn’t mind taking for a ride!!