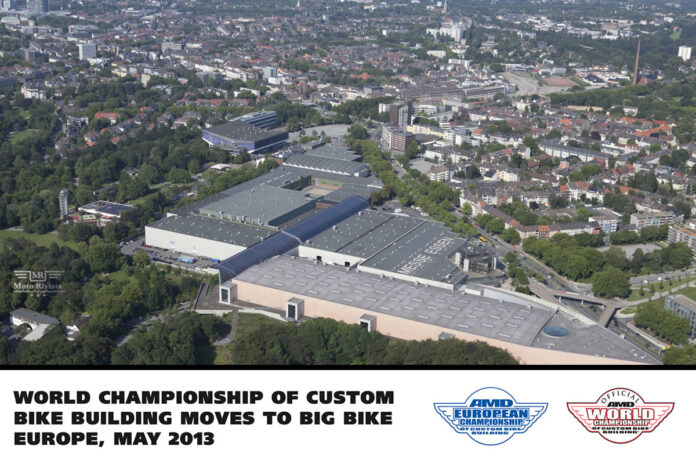 From May 2013 (May 10th – 12th) the AMD World Championship will be staged at the Big Bike Europe expo, at the Essen Expo Centre in Germany.

“The move to Big Bike Europe means that for the first time we will be able to bring the greatest custom motorcycles and the greatest custom parts together, under one roof, in an environment suitable for the purpose. That was an option that was simply never going to be available to us at any motorcycle rally,” said AMD Publisher and World Championship program operator Robin Bradley. Described as Europe’s “headquarters expo” for the international custom parts, performance and accessories industry, Big Bike Europe will be an expo at which exhibitor booth sales are restricted to businesses who match the principal aims of the event – namely to showcase custom motorcycle excellence; an expo at which dealers, riders and enthusiasts will be guaranteed an unrivalled and focussed environment.

“Riders want to be able to attend events that genuinely cater for their passions – and how their bikes look, handle and perform is centre-stage as the most important of those passions. Big Bike Europe will be a technical, design and engineering-led expo for riders who are serious about customizing.

“There are plenty of shows offering tee-shirts, beer, babes and bands, and that is great, they will continue to have their place – but there are none that are focussed purely on custom engineering. Riders have different expectations now.”

The three-day event unveils a new expo formula for the custom market. The first day, Friday May 10th 2013, is a dedicated ‘Trade/VIP’ day, which is reserved for invited members of the motorcycle trade – dealers, custom shop owners, custom bike builders and customizers, parts and accessory vendors, performance engineers, race teams and other trade and VIP visitors only.

Big Bike Europe will then open up to riders and enthusiasts at the weekend, with the World and European Championship awards ceremony closing the expo on the afternoon of Sunday May 12th 2013.