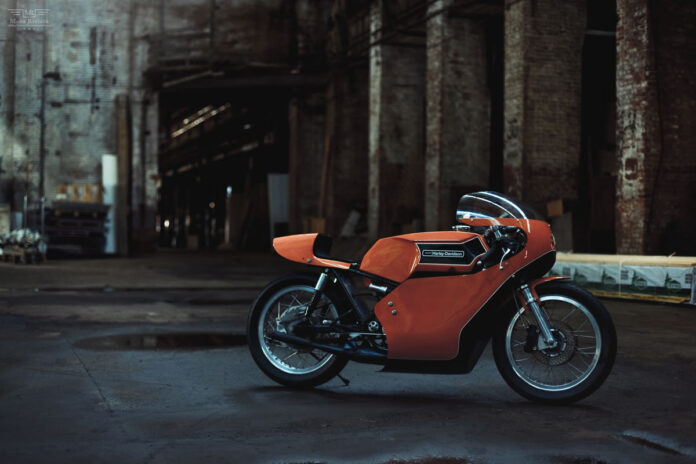 In the 1960s, 50% of Aermacchi stock was acquired by Harley-Davidson to produce several models of small bikes between 125cc and 250cc for the American and European market. With Japanese manufacturers such as Honda and Yamaha increasing their market share this was an attempt to take some back.

One of approx 25 built of the 350cc version. Fully restored, matching #’s, as built in Italy and ready for the track or display. Out of the 25 originals built, this is one of two known to remain at this time. After 1974, when the American manufacturer acquired complete control of the Italian company, Aermacchi bikes re-badged as Harley-Davidson’s. The only win on the Grand Prix circuit for Harley-Davidson was with either the 250cc or the 350cc versions in the years 1974, 1975 and 1976, with the rider Walter.

The owner of this beautiful Harley-Davidson Aermacchi is Nicks dad, Brian Keating. He is a collector and also runs ‘Keating Wheel Company’ who specialize in un-restored originals, barn fresh antique and classic motorcycles, light restorations, some brokering and special requests.

Nick tells us “Though not taken advantage of until recently, photographing my dad’s motorcycles has been a huge form of inspiration for me and we just finished up a piece for European CEO Magazine which will be on shelves later this November on into January. I’m pretty open to the future, but my plan is to keep the photo and video thing going as long as possible!”

The bike is up for sale on Ebay