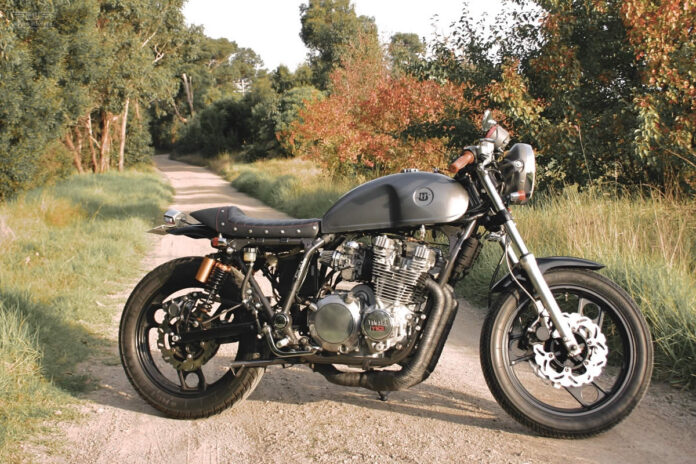 These guys are passionate about custom motorcycles and other cool stuff, taking the ordinary and turning it into the extraordinary. Their ‘moto’ is to capture a feeling by being authentic and make thoughtful stuff that works, as it should be. The bike we are featuring today is the Yamaha XJ900 aka 9 Hunge.

Like most custom bike builds there is a story behind the name, perhaps with this one it takes an Aussie to understand? We think its best to let Carlo do the explaining on this one! “9 Hunge:  A hunge, or hungey is a uniquely Australian term for one hundred.  “How much did that cost you?”  “a hungey”.  We found that our pet name for the bike was “the 900”, which true to Australian form, quickly turned into “nine hungey”.  When I finished the bike and tried to choose a name, it turned out the name had chosen us.  The 9 Hunge was born, as too was our brand ‘Halfway There Motorcycles”

The build started with the guys getting rid of any unnecessary metal and plastics. Power to the weight was the Mantra, which boosted the performance before even touching the engine. Boys from ‘Halfway There’ managed to get rid of almost 30kg of fat. Modifications were made to the frame to reduce the weight and maintain a simple framework. Then it was off to powder coating to get it ready for assembly. The bulletproof powerhouse was polished (but not over the top as this bike is meant to feel real – for riding, not showing) and was prepared for mounting.

The Benelli tank is our favorite and I guess it’s something you have to get right when building a custom motorbike. “We love the clean line the Benelli tank gave to the build. I think the introduction of an Italian tank to a Japanese bike gave it some extra street cred, or maybe it’s just that it looked right with the seat line.” says Halfway There

To carry the ‘touch of red’ theme through the bike Halfway There finished the 9Hunge with a studded, red stitched single seat that fits beautifully with the tank and frame modifications.

The tight backend was achieved by replacing the traditional rear shocks with two gas filled dirt bike shocks. According to Halfway There “We threw out the rule book; it’s just how we want our suspension to feel. We stripped back and then powder coated the frame, bars, steering and bits. Powder coating in grey gave it an understated chic look. True to the original design, integral to the feel we wanted.  That oversized light somehow pulls it all together”

According to Halfway There “When you sit on The 9Hunge and you look down past the tank, you see the brutish four cylinder engine jutting out from either side.  It’s not a traditional Cafe racer look, as they tend to be more compact and tighter, but I just love the reminder that we have that sort of power at the turn of the throttle”

Special thanks to Carlo from Halfway There Motorcycles for providing us with the awesome images and information.