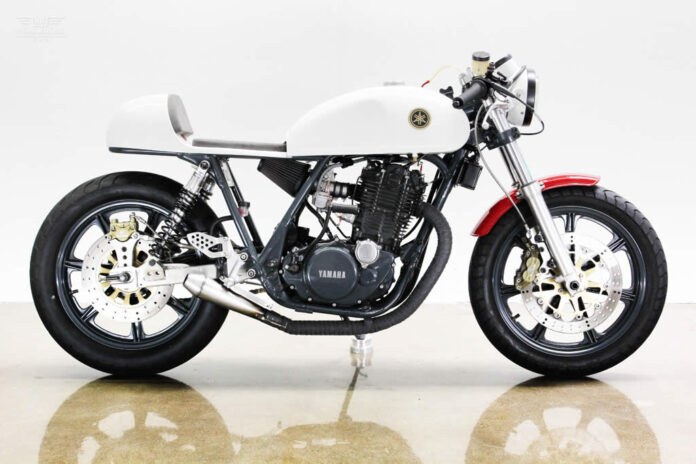 For some people the love of everything two wheels runs through their blood. This is the case for Jay LaRossa from Lossa Engineering, California.

Jay has spent his whole life around bikes and cars, both sides of his family owned dealerships. Watching his dad growing up has not only helped the foundation of some serious skills but also Jay had some pretty cool experiences.

Jay spent a number of years building Trucks and Hot Rods, moving on Jay worked for a famous bike builder where he felt that familiar ache of someone who hadn’t owned a bike for 10 years, he then picked up a Ducati Monster. The rest is history with a portfolio full of cool builds we are very excited to present the ‘1978 Yamaha SR500 Cafe Racer.

According to Jay “My bikes are solely my interpretation, yeah my cafe racers aren’t traditional style, who cares! I make them in the tradition of the original racers by striping off all the bullshit and making them fast! I have only just begun, once I get all these ideas out of my head, people will either be amazed or think I’m insane”.

Lets get down to the build! The engine of the SR500 went though some serious modifications and was bored out and assembled with White Brothers performance cam and piston, heavy duty valve springs and a ported head. The bike also features Mikuni 36mm flatslide carb to increase velocity and horsepower and a custom exhaust with Lossa Engineering’s beautifully shaped cone muffler.

The frame was de tabbed and hooped and the Gauge bucket was molded into a headlight bucket with re orientated Lossa brand tach face. A handmade steel tail section with frenched in Lossa tail-light, the front fender of this Yamaha SR500 Cafe Racer was a bobbed Honda with handmade fork brace. All the aluminum was polished first, then hand brushed and cleared over.

This Yamaha SR500 Cafe Racer features a GSXR front end with Works shocks, Brembo front and rear brakes with the wheels from RD400. All the electrics on this Cafe Racer were wired from scratch. We love that Binelli gas tank with custom gas cap and the Tommaselli headlight ears.

Jay describes this as ‘By far the best bike I have turned out!’ and we would have to agree, although there are plenty of other fine machines from Lossa Engineering to choose from.  Stay Tuned…

The bike featured in season 1 of Cafe Racer TV and is also shown here in this very cool video ‘Solus’ by Rick Bedenbaugh. If you haven’t watched it then do yourself a favour and watch it now!