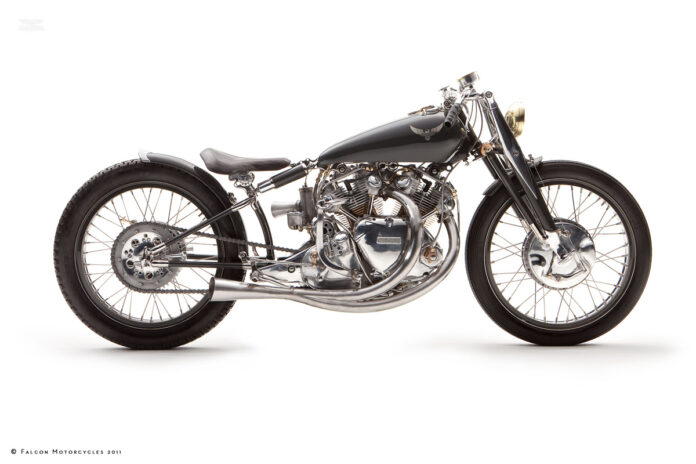 There is a time and a place for every thing to happen in the world, and so there was the build of the Black Falcon. Ian Barry and his team of 5 brilliant men spent almost one year, redesigning the Motorcycle from the ground up, performing all the fabrication at their Falcon factory.

Black Falcon is the third motorcycle in the concept 10 series from Falcon Motorcycles. Ian Barry founder of Falcon Motorcycle is the man who goes beyond the limit of custom motorbike building. We think there is a ‘Time Machine’ in Ian’s Garage, and he time travels back in time and watches the build of one of the best motorbikes in the world.

Lets take you back in time, Vincent Motorcycles was a British manufacturer of motorcycles from 1928 to 1955. Their 1948 Black Shadow was at the time the world’s fastest production motorcycle. The Black Falcon build started with  the engine of a 1952 Vincent Black Shadow that had been sitting in a former motorcycle racer’s bedroom for 35 years. Each moving piece of the 1,000-cc, push rod V-twin was examined and improved, its weight greatly reduced and polished to a mirror finish.

Black Falcon’s stainless steel fuel tank is quite unique, with efficient cooling fins and a glass center on the oil tank cap so the rider can check for oil return without taking off the cap. Falcon built two different tanks by hand from aluminum, one “Roadster” style for every day riding, while the other one is a smaller one-gallon “Quarter Miler” tank. “Quarter Miler” tank takes you back in time to do what Vincent Black Shadow used to do, which is drag racing. “Quarter Miler” tank also has a leather chin pad so riders can crouch into the bike for drag runs. The entire fuel system is apparently removable in less than 30 seconds, watch this video to see it in action.

On the original Vincent, Phill Irving created the motorcycle so the rider could easily adjust its brakes, chain tension-er, riding position and gearing without tools.

Black Falcon was created with the same principles, adjustable handlebars up to six different positions. Foot pegs, gear shot and foot brake levers can all be rotated into different positions depending on how the motorcycle is ridden. These are not the only part that can be adjusted at Black Falcon, the solo seat can also move forward and up two 2 inches allowing the seat to stay still while swing arm is in motion.

To achieve better performance in this modern world, Black Falcon went through extreme hand fabrication to frame, tanks, exhaust, front forks, handlebars, levers, brakes, castle nuts, bolts, seats, even the cylinders are all hand made by Falcon Motorcycles at their factory.

The attention to detail on this bike is phenomenal; we have to stop now otherwise this article might end up turning in to a book. Thanks to Ian Barry and his flawless team for building such a great Motorcycle.