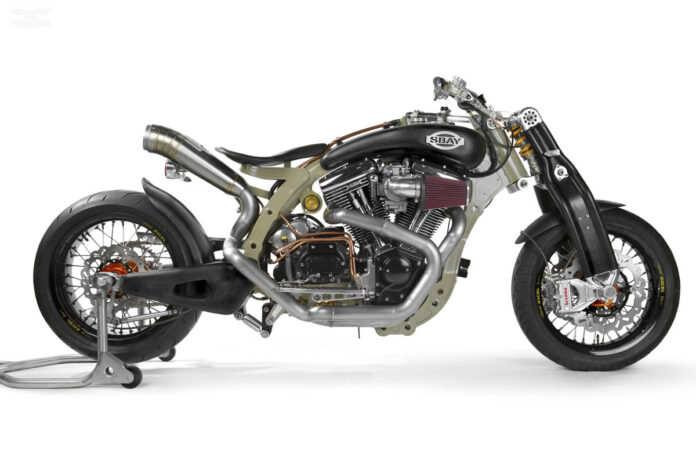 The first project by Sbay Motor Company the ‘Flying Sbay’ won the prestigious award of first place in the production class at the 2010 AMD World Championships. Needless to say we expected the second offering to be as good or even better still!

Sergio Bayarri owner and builder at Sbay Motor Company in Spain contacted us to present his latest creation, introducing the newest Sbay ‘Jerry’!

Whist the objective with the ‘Flying Sbay’ was speed, with ‘Jerry’ it was comfort and ease of use. Sergio tells us “A bike built to become a daily cruiser without the need of dressing up like Darth Vader. No need to curve your back to reach the controls, no need to stretch your legs to reach the footrests. The riding position is plain and simple, everything is located where your body demands, thus giving the rider the ease of use a daily cruiser must yield”.

Since their last creation Sbay Motor Company had the urge to produce their own parts for custom projects. To fulfill this they have recently acquired a new Hass CNC machining center and lathe. These machines allow Sbay Motor Company to design, produce and adjust parts as they need them, and within a short time frame. From the girder front end to the beltdrive and chassis all parts are machined in Sbay’s workshop. Power to weight ratio is the foundation of this build and the extensive use of carbon fiber is a core component. Their latest creation ‘Jerry’ has a total weight of 206 kg, handling ‘Jerry’ is directly related to the power to weight ratio.

The ‘Flying Sbay’ was tricky because of its shorter wheelbase; launching it from a standstill the front wheel was likely to become airborne. Jerry has a longer wheelbase allowing you to unleash all the power of 110” evo engine and yet have that front wheel on the ground.

Öhlins has taken the responsibly to keep this rocket on the track, girder front end has an Öhlins TTX with fully adjustable compression and rebound. The rear swingarm is kept under control with an Öhlins and a satellite canister placed directly under the riders seat allows for changes on the rear suspension on the fly.

According to Sergio “Handling of Jerry is directly related to rider stance, thus riding with a comfortable position is not the best way to attack corners. Nonetheless Jerry has 17” rims to reduce centrifugal forces responsible for keeping the bike upright when entering a turn and the footrests have been strategically placed to allow the leaning angle to reach 56 degrees. Leaning at this angle will take you to the edge of the tires, which for us is more than enough.”

Jerry is light, an easy bike that can be ridden with great comfort. The more you ride the more comfortable it gets, become familiar with the bike and you will be able to explore the limits of Jerry!

Sbay Motor Company is establishing an assembly plant in Florida where all the bikes for the US market will be assembled; the goal is to be fully operational by July 2012. Production for Jerry will be limited to 50 units; the starting price is 42000 Euros and for the US Customers $48000.