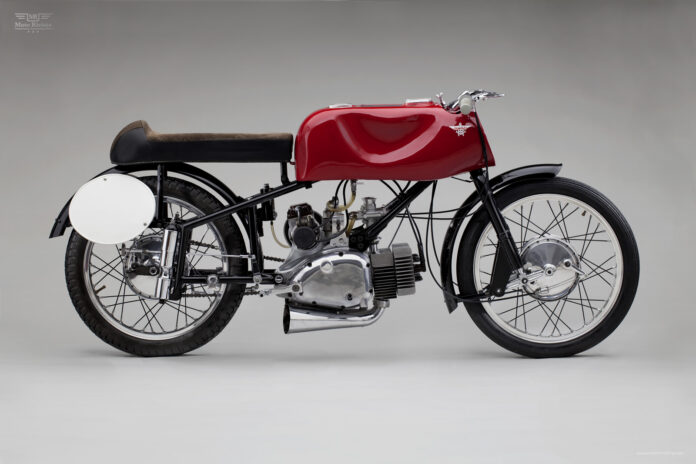 This Classic Italian Moto Rumi Competition SS Hunchback came out right after WW2. In the late 1940s, Italy witnessed a massive change in consumption recovering from the war, Donnino Rumi saw this as an opportunity to venture into the motorcycle business.

Focusing on lightweight motorcycles because they were easier to manufacture and also had a low maintenance cost. Rumi based their motorcycle power plant on designer Pietro Vassena’s horizontal twin two stroke unit with 125cc capacity. A radically novel configuration that contrasted with the four-stroke, vertical single cylinder design employed since the pioneering days of the motorcycle history.

A prototype was developed in 1949, and a definitive version generated tremendous interest when it debuted in March 1950. Moto Rumi’s bikes have always been distinguished by their originality, as much as with their stylistic techniques.

The success of Rumi’s street motorcycles in 1950 encouraged the company to produce a model explicitly for racing. Moto Rumi’s objective was to craft a reliable machine that maximized the strength of the 125cc two-stroke twin on a lightweight frame. Later in 1951 Moto Rumi presented their Competition SS 52 at the Milan Motorcycle Exhibition, which was dubbed “Gobbetto” (Hunchback).

The Gobbetto (Hunchback) name was given because of the abnormal hump in its stretched fuel tank. Moto Rumi’s Gobbetto had a maximum speed of 136 km/h and therefore had trouble competing against four stroke engines at topflight speed events. In events where acceleration and the skill of the rider played a greater role it performed very well for example urban circuits, endurance races and hill events. In 1953 a new version of Gobbetto was introduced with several modifications. The production of this model ended in 1955 and only fifty units ever rolled out from the production line.

This 1952 Italian Classic Moto Rumi Competition SS was on display at the San Francisco airport.