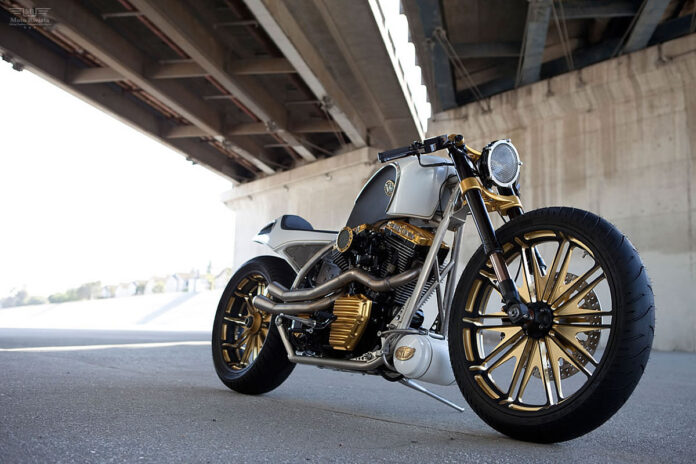 When celebrities have a custom craving where do they go? In Mickey Rourke’s case he went to one of our personal favorites Roland Sands Design. Mickey wanted a one-off custom motorcycle in memory of his late best friend and constant companion his Chihuahua Loki.

It’s not that hard to connect Mickey Rourke with motorcycles, rewind to 1983 when he appeared in Rumble fish as Motorcycle Boy. Then in Harley-Davidson and the Marlboro Man in 1991 with a customized Harley-Davidson, the movie became somewhat of a cult classic following its release to video, promoting a male biker stereotype. Back to the build the Roland Sands Design team began by dismantling a stock 2005 softail. Leaving the neck, frame cradle and the engine to kick off the build. The frame of Mickey’s bike went through intense customization and features a one-off single sided swingarm.

Fabrication work on Rourke’s bike included a one off hand-fabricated fuel tank, oil bag and a seat pan with an adjoining tail section. The colors of the engine and the wheels of the bike were selected by Mickey and his good friend Jason Statham, who is also a motorcycle enthusiast.

According to RSD “We started off going rustic with Mickey’s bike, but it’s turned into something much more finished and a bit experimental. After a visit from Mickey a few months ago we decided to go with satin black on pearl white flake paint and over the top gold and black finishes.”

To reflect Mickey’s color choice RSD’s personal favorite Chris Wood was commissioned to paint this mean machine. Whilst there was a long time between the start and finish of the build, the end result is a masterpiece. My personal favorite on this build is the color combination and the fuel tank, what is yours?