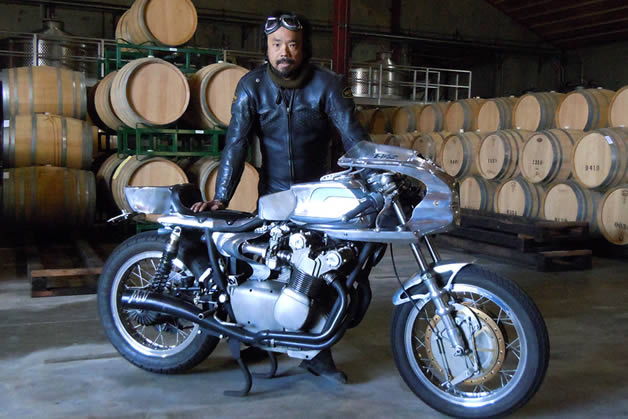 The 2012 LA Calendar Motorcycle Show sponsored by Russ Brown Attorneys continues its now 21-year tradition on Sunday July 22nd 10am-6pm as the premier outdoor streetbike event in America with top Celebrity Builders, the upscale Calendar Bike Building Championship & Concours d’ Elegance. The Show moves to beautiful new location this year to the tree shaded grass hills of the Calabasas Country Club and Gold Course in the Santa a Mountains, with Low Spectator Admission and Free Parking. The Calendar Show is broadening its focus this year to include the growing Collector Bike Market with Exhibitors and Bike Show classes for classic European, British and Japanese motorcycles, along with American V-Twins and Customs.

Former Calendar Show winners in attendance include Shinya Kimura will be premiering two new of his famed retro custom builds at this year’s Calendar Show. Shina’s unique hand craft customs have beed featured in the FastDates.com Motorcycle PinUp Calendars every year since 2004 when he first garnered Best of Show in his first LA Calendar Show visit.One is an all new, undisclosed build. The other is this recently completed 1973 MV Agusta 750S named “Blue One” which he rode on a shake-down ride at the recent Quail Motorcycle Gathering, Carmel, CA, on May 5th, where it was unexpectedly awarded the Quail’s Custom/Modified 1st Place Trophy. and the Cycle World “Elegance in Action” Award.

Attendance capacity at the Calendar Show will be limited, so purchasing advance online Spectator and Exhibitor tickets at www.FastDates.com website is recommended. Admission tickets are available at $20 without Lunch, and $30 including Lunch, with Food and Beverages available separately. Visitor Parking is free. The The Calendar Show is held at the Calabasas Inn, 23500 Park Sorrento, Calabassas, CA 91302.

For additional information and to purchase advance ticket go to: www.FastDates.com/BIKESHOW.HTM