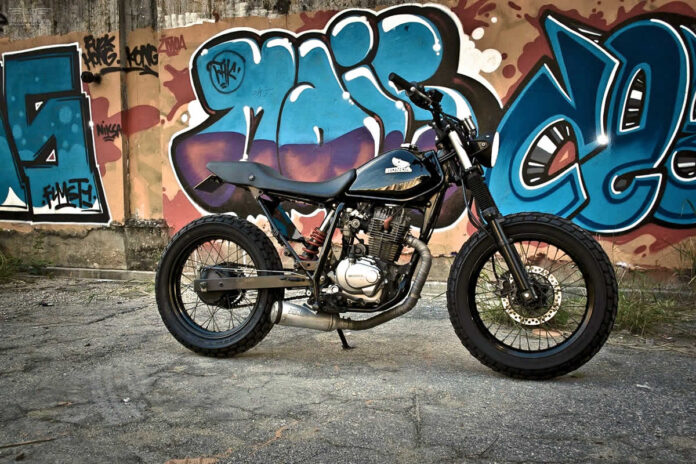 This Honda FTR racing and vintage styled flat tracker is the daily ride of its owner and creator Wesley from Hong Kong. Wesley has a music blog called Abandoned Pier, which is where we spotted this beauty called The Yakuza.

The Honda FTR is a Japanese classic lightweight road bike, looking at the stock bike you will notice that it could be perfect match for a custom flat tracker project. No point in visiting your local Honda dealership looking for one of these Honda FTR, not many are known to have left Japan.

The objective of the build was to create something different, move away from the Café Racer style bikes. When I read Wesley’s blog post about this build so much of what he said rang true to me. Customizing a motorcycle or anything for that matter is an extension of your personality, the true beauty only emerges once personality and style enter the equation.

We see so many amazing custom projects which is what we are passionate about, but what we really love is reading the stories behind the builds…getting inside a builders head and finding out why they did something is fascinating and gives a whole new perspective to the finished project.

Wesley wanted to create a simple and elegant machine; anything that wasn’t needed for the bike to run was cut off. The bike is a late model 2006 Honda FTR, to begin with the bike was stripped back and the cam chain and gaskets were replaced and the valves re-adjusted.

Wesley rebuilt the carburetor, shimmed the float needle and re-jetted it. The air box was completely removed and a stack was added which was sourced from Japan as well as a supertrapp muffler from the US. The supertrapp exhaust uses a system of disks, which features a larger opening on one and causing an acceleration of the exhaust gases exiting to the engine. The header was wrapped in fiberglass heat wrap to compliment the cool exhaust system.

The next step was getting rid of all the plastic body parts including the front and rear fender along with the taillight and number-plate brackets. Once the Honda FTR was stripped down, Wesley attacked the frame with a grinder and removed all the oem brackets from the frame and re-sprayed it in flat black. The huge stock battery was also removed and replaced with a smaller 6 lithium ion a123 battery. What you get with the new battery is more cold cranking amps and it lasts ten times longer then standard led-acids at a fraction of the weight and size.

Wesley also got rid-off the signal lights, flasher relay, kickstand dead switch and the instrument cluster. The wiring loom was also simplified and all the electronic and cables were fitted on a fabricated bracket in the tight space below the seat. According to Wesley “This was certainly the hardest part of the build and you’ll be surprised at how many cables can come out of a motorcycle. This bike is electric start only, which means I had to get really creative when hiding the electrics.”

The finishing touches included some fork boots and a Daytona speedo from Japan, as well as some new grips and Rental handlebars from the UK. The stock Honda FTR tank remains the same and its lines flows well with the seat. The tank, headlight and a few others parts were also painted in black to match the new color scheme.

The Yakuza has no mirrors, no indicators and no airbox and isn’t what you would call street legal! According to Wesley “this bike is really loud, really fun and really fast. I like to think of it as a BMX with an engine”.