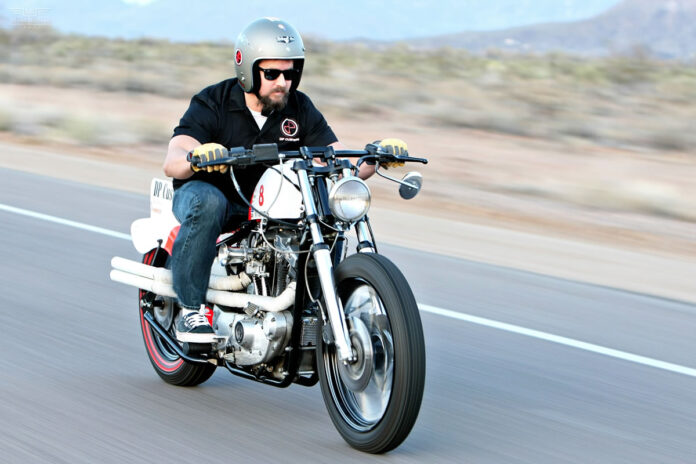 I am sure by now you all know who DP Customs are, at Moto Rivista we are addicted to their craftsmanship with many of their bikes featured on our website.

Brothers Justin and Jarrod Del Prado both have one thing common and that is building custom motorbikes with a classic touch. Passionate about auto racing, that influence can be easily spotted on many of there custom bikes. Today’s feature “The3” Harley Ironhead bike is the personal ride of Jarrod Del Prado.

According to Jarrod “This bike is my daily rider and we actually built it a few years ago from an 1982′ 1000cc Ironhead. We painted it bright red and I rode the hell out of it that way. Part of the fun of having a motorcycle shop is working on your own bike, so we decided to repaint it and smooth out the forks on the lathe. The paint scheme is my favorite part of the bike… We are huge racing fans and this is where the paint inspiration came from. I have been a huge Ayrton Senna fan since his breakthrough races with Lotus. He is, however, mostly known for driving the Marlboro sponsored McLarens, and I always thought that paint scheme would look killer on a motorcycle. I went with his number 8 from the 1993 MP4/8 Ford. Senna scored 5 wins in that car – including perhaps his best ever drive in the wet at Donington Park. His motor was an underpowered B-squad Ford and the car was twitchy to drive, and he still put it at the front with his daring skill.

I wanted to be reminded of Senna’s greatness every time I rode, and this bright white and neon red livery with DP Customs in Marlboro font does the trick. While we were at it, we also thought it would be cool to add decals of the folks that help us survive, like we had sponsors, ha!! So in addition to the McLaren graphics, we added Strahmphoto, Duffee Motorsports, Onset Networks, Ramjet Racing, and Biltwell. We buried it all in matte clear.

The biggest challenge was fabricating the rear fin. I wanted something huge, probably to the chagrin of the public, but I knew my brother Justin could fabricate it perfectly. And that he did… We were looking for something straight out of the D-Type Jag era, and after plenty of sheet metal massaging, it came out just right.

It looks sick in the bright sun – like nothing else on the road, and now I REALLY enjoy riding it!”

Hats off to Brothers for translating their passion on this bike, the finished bike ‘The3’ does reflect the D-Type Jag era. Riding this bike to a racing event would be an absolute pleasure, imagine the attention and appreciation it would receive from racing fans!!