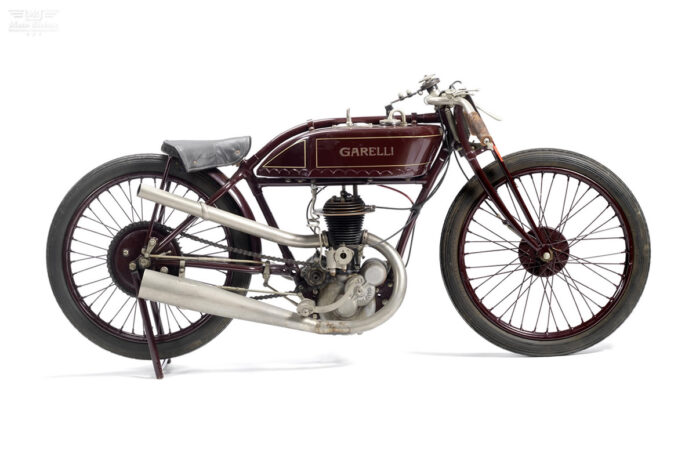 By the time Alberto Garelli was 22 years old he had already earned his degree in engineering. Alberto dedicated his work to developing and perfecting the 2-stroke engine for Fiat, in 1911 Garelli left Fiat due to their lack of enthusiasm for the 2-stroke engine. After leaving Fiat Garelli continued working on his own engine design from 1911 to 1914 which resulted in the 350cc split-single. Garelli also worked for other motorcycle manufacturers from 1914 to 1918. At that time he won a competition organized by the Italian army to design a motorcycle. In 1919, Garelli constructed a 350cc motorcycle, which set a long distance record from Milan to Naples. Ettore Girardi the rider covered the 840 km.

The Garelli 350cc split-single remained in production until 1926 and made a major impact in racing. In 1926 Ermino Visioli was the first Garelli man to enter the Isle of Man TT. After World War II, Garelli concentrated on producing smaller bikes and mopeds for the European market.  Garelli dominated the 125cc class in the early 1980s Grand Prix motorcycle racing, winning six consecutive world championships. The Garelli Motorcycles Grand Prix motorcycle racing winners were Angel Nieto from 1982 to 1984, Fausto Gresini in 1985, Luca Cadalora in 1986, Fausto Gresin in 1987.

This 1926 Garelli Racing Motorcycle you see above in the pictures embodies the 350 Grand Prix Garelli in its final incarnation. The split-single engine can produce a maximum of 20bhp at 4,500rpm. It was good enough to kick some ass at the top speed of 130km/h (81mph). This motorcycle also made to front cover of ‘Agrati Garelli: 80 anni di storia’. This 1926 Garelli Racing Motorcycle is up for auction at Bonham’s and is estimated to be sold for US$40,00 to 53,000.