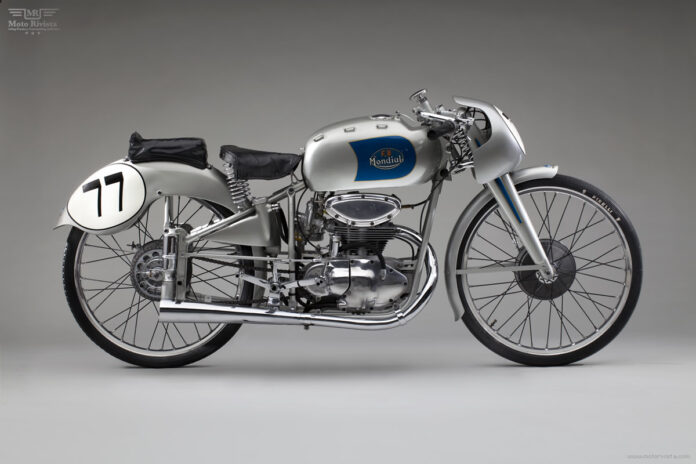 Born and raised in the Italian city of Bologna, FB Mondial Bialbero Grand Prix Motorcycle was the magnificent creation of designer Alfonso Drusiani.

FB (Fratelli Boselli) came to existence in 1936 when the Boselli brothers started producing motorcycles under that name in their Bologna plant. Their first bike a DoHC 125cc named Mondial was designed by technician Alfonso Drusiani. In 1948 the FB Mondial became the official brand and started producing lightweight motorcycles with two and four stoke engines.

Drusiani’s chef-d’oeuvre  FB Mondial made an immediate impact on motorcycle racing with it’s technically advanced double overhead camshaft 125cc engine. Alongside the cylinder Drusiani’s creation featured a short vertical shaft, which drove a train of five gears within the cylinder head. Both camshafts were driven by the gears at each end of the train of five gears. The precise engineering provided the bike an extraordinary power and showed the world that FB Mondial motorcycles were ahead of their time.

The 1948 GP of Nations (Faenza) was the first race for the new FB Mondial, which ended early due to a fuel tank split. Later in October by using crude aluminum fairings, FB Mondial set the world records in the standing start ¼ mile and one-kilometer 125cc class. In 1948 at Monza Grand Prix circuit FB Mondial earned a victory.

Drusiani’s machines ruled the 125cc series from 1949 to 1951, dominating the rivals MV Agusta and Benelli. They set the standards for the ultra-lightweight class among industry insiders and racing fans.