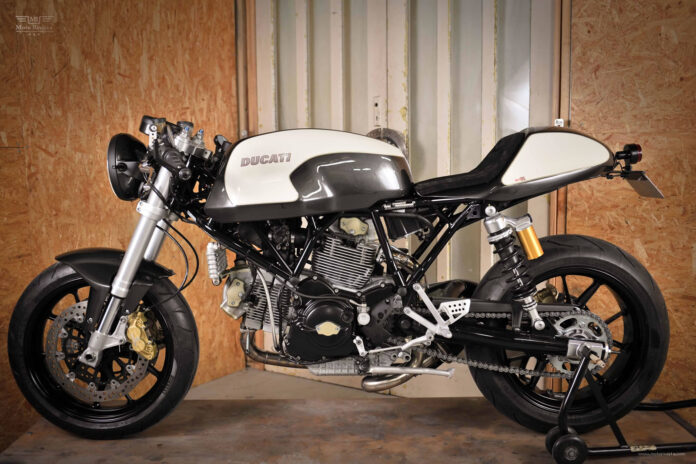 Today’s feature build a Ducati Sport Classic comes from the Sydney, Australia workshop ShedX. Builds like these are the fuel for our passion and the testament to our desire to own one.

Neil from ShedX tells us the story of this custom Ducati and the ShedX workshop “ShedX came about around 15 months ago when a mate of mine Jim and I decided we were rather jaded by what was on offer here in Sydney Australia. The name was a take off from the Mercury Offshore racing test lake in Florida “lakeX” which remained a mystery for many years to those in the powerboat industry.

We decided the only way to get the bike we now wanted to ride would be for us to do it ourselves, so our first build “bastardo” was born. Being teenagers back in the 70’s in the UK we grew up riding bikes from Bonnie’s and Commando’s to Z1’a and 500 triples. We have both spent a lot of time here in Australia racing a variety of bikes but we gravitated over the years towards Ducati.

To our way of thinking we like to build a bike that functions well as much as making it look cool, any changes must make the bike perform better than before and it has to brake, handle and perform at a high level. That after all was the base of the café racer culture back in the day…..get back in one piece before the jukebox finished.

This Ducati Sport Classic is our fourth build to date, our customer brought us his stock sport classic after seeing our first build a naked Ducati ST2 conversion “bastardo”. His instructions were the bike had to retain the tank, headlight and the rear end could be changed but the seat unit still had to have the sport classic look.

This was not to be a bolt on special, where ever possible Ducati parts were to be used. We swapped out the wheels for a 999 set and used 99 triple trees, braking was taken care of by multistrada 1100s discs mated to gold line Brembo calipers front and rear.

The sub frame was de tabbed and a slimmer profile fiber glass tail unit was laid up in house, a suede covered seat finished off the now slimmer rear end. The stock battery box and battery were binned and a earthx Li ion battery was re located under the seat unit along with the repositioning of the rectifier, this modification alone de clutter’s the whole under seat area.

A one off custom made 2 into 1 exhaust system was fabricated in house and the air box removed and replaced with uni filter pods, this set up allows the 1000ds motor to breath as it should. We made a new instrument housing for the speedo and tacho replacing the rather sit up version used on the stock set up. 1098 clip-ons were fitted giving the bike that café racer feel reminiscent of the original ss’s from back in the day.

A dark metallic grey paint colour is contrasted by off white panels and gold striping; we like to think we kept the classic in sport classic.