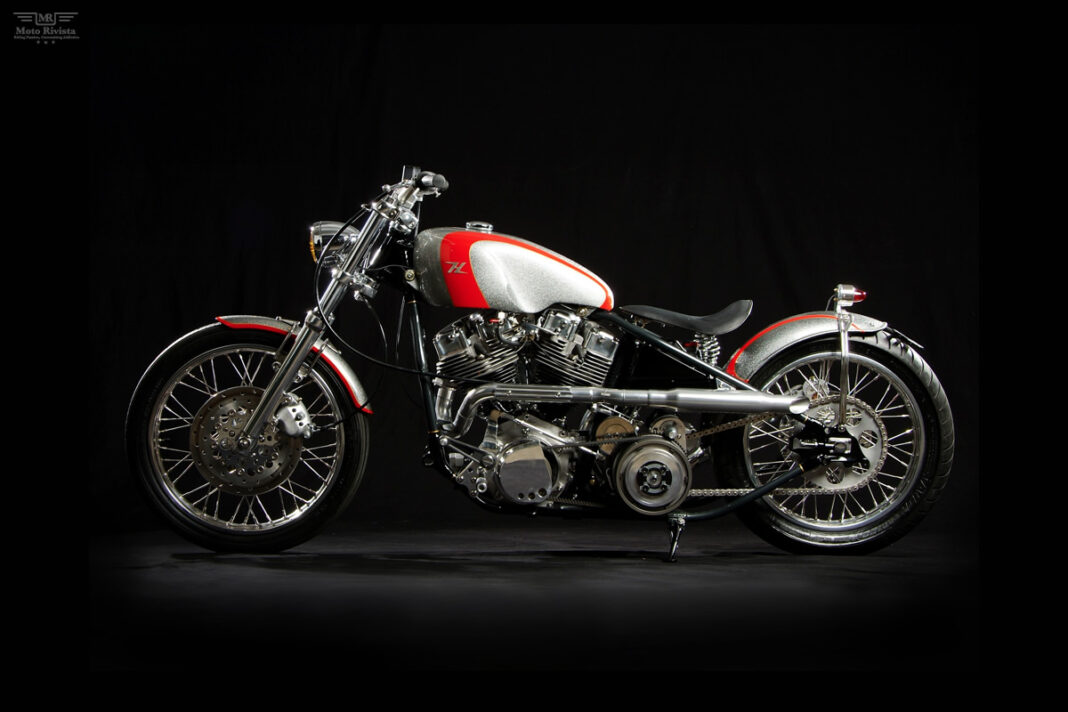 The feature of today Van’s Custom Shovel is known as an urban assault vehicle, a perfect bike for the pitfalls of city riding. Designed and built by Walt  of Walt Siegl Motorcycles in New Hampshire.

The owner Van Santvoort came to Walt’s shop with a 72 FX, which had already been customized. The previous customization work left the bike heavy, sluggish and scary on the turn. That’s reason enough to get a decent customization and Van Santvoort put his bike in the right hands to get the look it deserved. To begin with the build Walt stripped down the bike and the engine was sent to the Connecticut Performance Center for a complete rebuild. On it’s return the engine weighed significantly less than it did before the rebuild. Van’s initial brief was he didn’t want a big bore kit; he wanted the motor to be strong and quick, but appearing stock. The 74″ Shovelhead was rebuilt .030” over stock with lightened Keith Black pistons, lighter-than-stock Carillo rods, and Harley-Davidson flywheels that had five pounds shaved off. Then the assembly was balanced and stuffed into Harley-Davidson cases, cylinders, and topped off with a pair of ported Harley-Davidson heads.

The exhaust pipes on Van’s Custom Shovel are quite interesting, the front pipe is straight and the rear pipe is curved and the interesting thing is both pipes are the same length, it’s a performance trick which has been used by racers for many years. The pipe was finished with HPC coating, which claims to help reduce the overall engine temperature and also give them an interesting look.

Van’s Custom Shovel also features a Tech Cycle one and a half inch open belt drive primary, which delivers power to the modified Harley-Davidson transmission. While the guys at Connecticut Performance Center were rebuilding the engine Walt was putting together a new rolling chassis for Van’s Custom Shovel and used a V-Twin reproduction rigid frame. The wishbone down tube frame features a stock raked neck and no stretch. A Dyna front-end was hung from the neck with a few modifications; the triple trees were re-machined to remove some weight from the front end. The riser mounting holes were relocated to mount the bars as low as possible.

After joining the freshened drive train with the rolling chassis, Walt started fitting sheet metal to the frame. The fabrication work includes a ’48 Norton gas tank, two-thirds of the tank was chopped away and the rest was made from scratch. Walt also made the oil tank and the fenders. Nate Wiener molded the metal and painted it with silver metal flake paint with red stripes.

The H emblem was fabricated out of sterling silver by Shana Leino a local jeweler, this was to resemble the H that was used on some early Panhead and Sportster tanks. There is no chrome on the bike whatsoever; every bit of the metal is either aluminum or stainless steel. An amazing custom motorcycle with mind-boggling details, hats off to Walt for putting together such a creation!