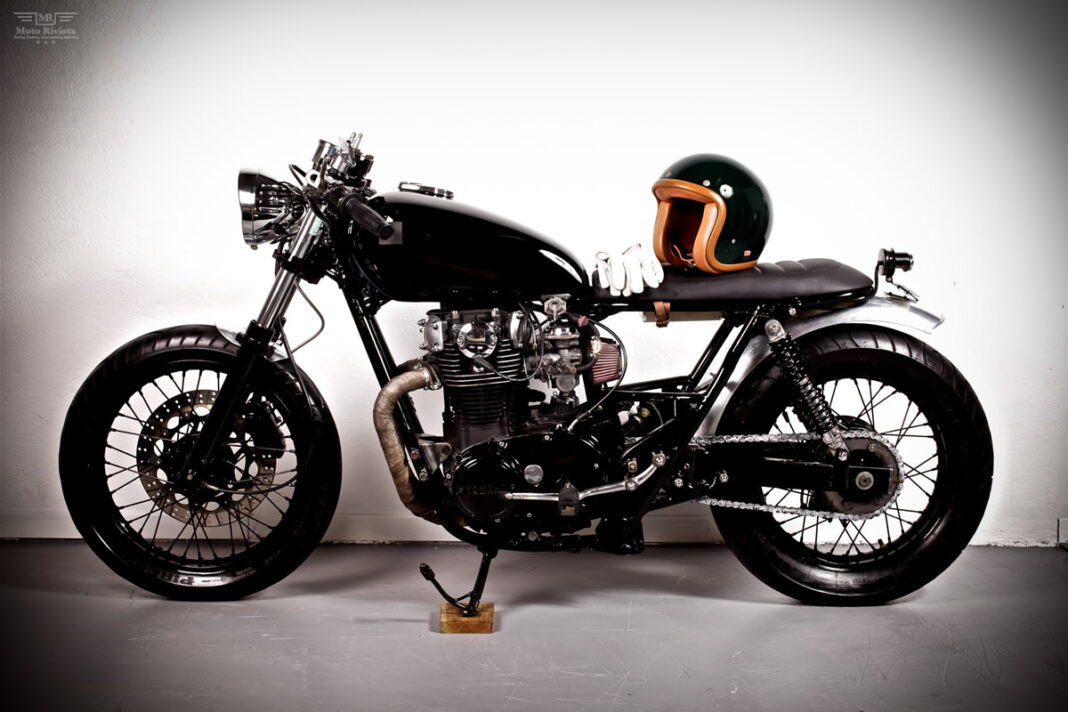 This custom Yamaha XS 650 is the personal build project of Alex from Guadeloupe. Alex had his first motorcycle at 3 years of age, a 50cc Yamaha PW.

He didn’t pass his motorcycle licence until he was 22 and his ride at the time was a Ducati 800 S2R followed by a 696 Monster. It was the discovery of the French Café Racer Magazine that ignited his desire to build his own motorcycle. A 5-month gap between the commencement of his studies as a Yacht Captain was the perfect opportunity to fulfill this new desire….and the build begins According to Alex “the biggest challenge for this build was to find a nice motorcycle to start the project, because here in Guadeloupe there are no old motorcycles at all, and my budget was really low”.

Once he had secured a donor bike, which luckily turned out to be ok, he started by disassembling everything part by part. At first the rear of the stock frame was modified to give it a new shape. The frame and the engine are from an original 1979 Yamaha XS 650 3L1 and the rest came from a Yamaha 250 TDR.

The stock Yamaha XS 650 engine went through lots of cleaning and later it was painted with heat resistant matte black paint, the crankcase was painted in gloss black. Alex also repainted the frame, fork, swingarm, tank, wheels and the brakes in gloss black paint to match the rest of the bike.

According to Alex “For the exhaust I have a manifold exhaust for a big bang noise, I will keep it like this until I get a warning by the police 2 or 3 times, but I live in Guadeloupe which is a Caribbean Island so its pretty cool here”.

Lots of parts for this build were sourced from MIKES XS in the US, which included joints for the engine, XS performance air filter, all the bolts for the engine and the frame. The battery was removed and a Kennedy electronic ignition was added to the bike. Since the electric beam was dead, Alex had to do all the electrical work, which he says was no fun at all!

At the rear this custom XS 650 features a Kawasaki h2 suspension. The headlight is from Dime City Cycles in the US, and the half handlebar is from LSL. The backlight and the fender are from Chatokhine in France. Alex also made the support for the fenders, front and back light. He also made a braided hose for the front and back brakes and added a brand new speedometer to simplify the motorcycle.

On his quest to build his bike Alex had his Dad help him with the welding, a fantastic way to bond and share their passion. Alex sums it up nicely “after 5 months of blood, sweat, beers and 5 stroke kick she resurrected. It was really impressive for me, because it was my first time doing customization or anything mechanical. To me she is really beautiful, and when I started I did not expect a result as good as this”.

Special thanks to Alex for putting together the build story for us, in his first attempt to create a beautiful bike Alex has done an exception job.