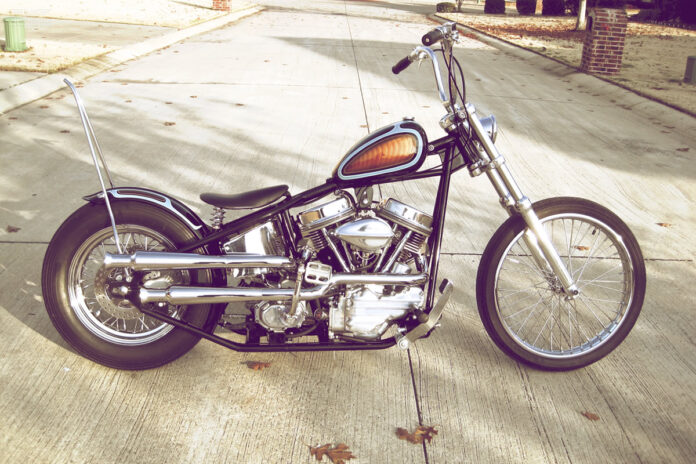 Panhead is one of my favorite Harley engines, easy to recognize because of the distinct shape of the rocker covers. Some of you may have seen the movie Easy Rider with Peter Fonda riding the Panhead Captain America chopper.

My Panhead craving took me a bit further trying to find something with more custom flavors, when I came across this custom Panhead built by Maindrive Cycles. Maindrive Cycles is a small custom shop based in Lucas, Texas operated by Cory a one-man army. He is dedicated to building no-nonsense, traditionally styled custom motorcycles with a level of craftsmanship and attention to detail.

A friend of Cory’s, Chris received a rolling chassis from his wife. I did say wife, this isn’t a typical gift for a husband to get from his wife! Due to the hustle and bustle of everyday life Chris never got the chance to finish his project, so he commissioned Maindrive Cycles to turn his vision into reality.

It started out as a basic rolling chassis from Flyrite. At the rear it has 2 brakes one on each side, so the front end would stay as clean as possible. The Santee rigid frame was crowned with a polished 88″ Accurate Engineering Panhead motor.

According to Cory “It is always a good idea to rubber-mount or leather-mount gas and oil tanks to fight vibration, so we decided to use a softail-style (Evo era) oil tank, and take advantage of the rubber mounts that they offer. This required special brackets for the bottom mounts, available from Daytec. There is nothing worse than a rear fender that doesn’t fit the tire properly. In order to get this one right, I had to re-radius the fender with a few 2×4′s…basically to ‘widen’ the fender, and in turn, tighten its radius so it fit perfectly”.

The gas tank of this custom Panhead was a genuine British Wassell, the tunnel was chopped out by Cory and then re fitted so the bottom of the tank would flow with the frame gusset bar. Cory also welded in a smaller gas cap at the peak of the tank. At the front the bike features a HD narrow-glide front end with shaved legs, which was done by Cory’s friend Mark at Aardvark Cycle. The transmission of this custom Panhead was rebuilt by Cory under the supervision of his mentor Mark.

The sissy bar on this custom Panhead was mounted with Maindrive Cycles sissy bar mounting kits. Cory also mounted an old school style Bates seat that adds to the look of the bike. Since Chris liked the look of the cocktail shaker mufflers, Cory built a custom exhaust around a pair of them. The bike also has 2000-2006 Harley Softail forward control brackets, which took some serious chopping to get the right bracket to clear the generator cover. To keep the front clean Cory welded the integral risers to the bars…can’t get any cleaner then this says Cory.

The killer paint job on this Custom Panhead was done by Brian Bass of Bass Kustom in Dallas.