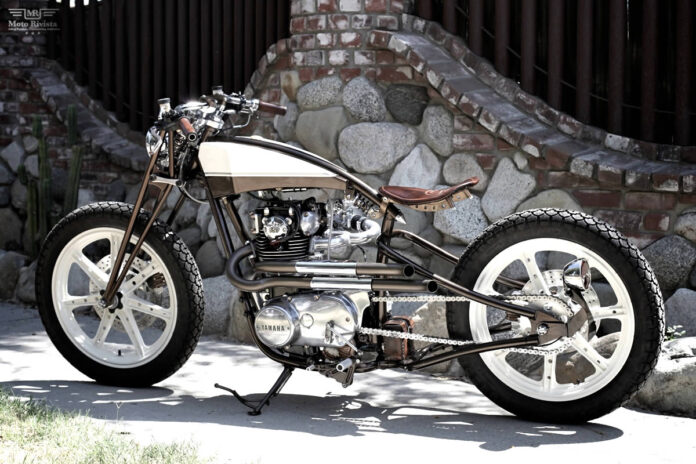 I am sure not many custom motorbike builders will dare to try that, but the brothers at Chappell Customs are always into building something interesting. Their latest board tracker build is based on a custom Yamaha XS650, and looks stunning.

The brothers Rob and Chris at Chappell Customs have built a variety of successful custom motorbikes. With their latest build they received another Yamaha XS650 donor bike, this time a 1982 Heritage Special. To see how far the Chappell brothers have came they decided to push themselves beyond the traditional XS650 builds and the brothers also wanted to build a custom frame for the bike.

While Rob’s style leans more towards racing and cafe’s and Chris’s style is more towards bobbers and choppers it was decided- after much back and fourth – to build a bike in the middle, a board track influenced bike that would have a custom frame, traditional girder front end and tall skinny wheels. If time allowed they would also tackle their first custom gas tank! (which they did)

One of the factors regarding timing on this build was Chris was due to be a first time father right in the middle of it, so the scramble was on to cut the original frame, plan the new design, and get as far along as possible until garage time would be cut drastically. Before cutting into the frame Chris built a frame jig and engine jig to mimic the stock angles of the original XS in terms of headstock angle, engine position and wheel base. He began cutting away the stock frame being sure to keep the original headstock so the bike could still be registered. “We believe the final bike should always be as rideable as it is cool looking, not just a display piece” says Chris, with that in mind a few photos were sent over to Rob and he whipped up some photoshop mock-ups of potential frame layouts. A selection was made and the tube bending commenced. In order to get the stance just right they went with two XS 19” front wheels, Chris drilled holes in the wheel spokes for some added flare and then used an aftermarket front wheel conversion kit to fit it on the rear of the bike. On the front they used a Harley style girder front end and had to modify the headstock for fitment, wheel bearings were sourced, and front wheel spacers were machined by Chris to fit the XS wheel to the girder. The seat design was going to be tricky because “we wanted to create the illusion that the seat is floating in mid air where the frame ended,” says Rob. They figured out with some paper mock-ups the design and the seat brackets were plasma cut and mounting points added to the frame. After looking at the completed frame and a lot of photos of old board trackers they decided that aftermarket gas tanks just wouldn’t cut it, so the fabrication began on a custom tank that would fit the frames lines.

A custom leather seat cover was created by their friend Luis over at luisleatherstuff.com, showing the traditional 33 logo (3rd letter of the alphabet is c = cc Chappell Customs) and stained to look vintage. The build then moved over to the engine while Rob was in town to help with the tear down.

The engine was recently rebuilt but still got cleaned, degreased, soda and walnut blasted, fitted with new piston rings, honed cylinders, valves re-lapped and all gaskets and seals replaced. Chris also machined a custom tach plug to eliminate the stock tach gear that sticks out of the right side cover, and a custom hydraulic clutch was fitted into the left side cover. For electricals the bike uses a Boyer ignition system, a Sparx capacitor, and a PMA (permanent magnet alternator). This bike is capable of running battery-less. Chris also designed and fabricated a custom 2 into 1 aluminum intake system running a single 36mm carb.

Chris, with help from wife Jessica, made some custom leather grips and a matching battery bag also stained in the antique style of the seat.

With the arrival of a new baby and time at a premium the build stalled for a while over the winter. Small components were being created by Chris in L.A as well as a 200 square foot garage addition to help make room for the expanding machine shop and Rob was busy on his own builds back in Canada. Fast forward 7 months to July and Rob was back in L.A. to help get the build finalized.

Many of the parts Chris had already powdercoated, so a lot of the bikes theme discussions were based around colors already selected. Once Rob was there in person, things started to change. They stripped the first color of powdercoating off the wheels so they could finish the bike in the new theme’s direction as dark wheels no longer suited the build. “We had been discussing themes for the bike over emails and phone calls and knew we didn’t want to go with a flashy paint scheme that would detract from all the work put into the bike, but those dark wheels weren’t cutting it” says Rob. “I wanted it understated and classic, not disco, something like a pint of my favorite dark beer,” says Rob and “Stout 33” was born.

From the cream wheels nestled inside the dark metallic bronze frame with copper accents, the dark engine rising up to the frothy head of cream on top, we think we achieved our goals on this build. Classic Custom built Cool – indeed.

While it took much longer than our typical builds we feel the end product was worth the wait. We weren’t trying to go over the top or “strange for strange sake,” but remain elegant and functional with extreme attention to detail and that overall ride ability we strive for in every build. We hope you like it – Chappell Customs.