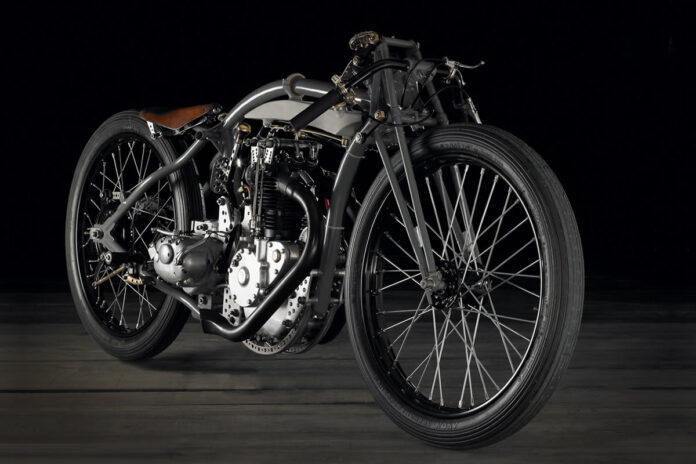 This remarkably elegant vintage motorcycle is actually a bit of a mongrel: it’s a Rudge ‘bitsa’ built by Jean-Claude Barrois, who also restored the Honda CB450 and Terrot racer. This bike has had a checkered life, starting out as a 1928 Soyer—a French brand that produced motorcycles between 1920 and 1935. Like many French makes of the time, Soyer used a variety of engines for their motorcycles, including  JAP, Sturmey Archer and Chaise. This particular Soyer 07S had a JAP engine but the frame was wrecked, so Barrois built his own frame—and eventually replaced the JAP motor with the 500cc Rudge unit you see here. All unnecessary parts have been removed to make it lighter—including the front brake—and a new quarter-gallon tank has been added, along with a “suicide knee” gearshift. Since this photo session two small fenders have been added, and the tires have been changed for modern high-speed Avons.

Jean-Claude is now optimizing the ignition system to gain a better spark. The photos are from Guerry & Prat who are experts at providing beautiful photos of unusual motorcycles. They’ve just launched an exhibition in association with Nick Clements (of Mensfile fame) in Toulouse, which would definitely be worth a trip if you’re in Europe. Find out more details of the Rudge build from the Southsiders MC website.