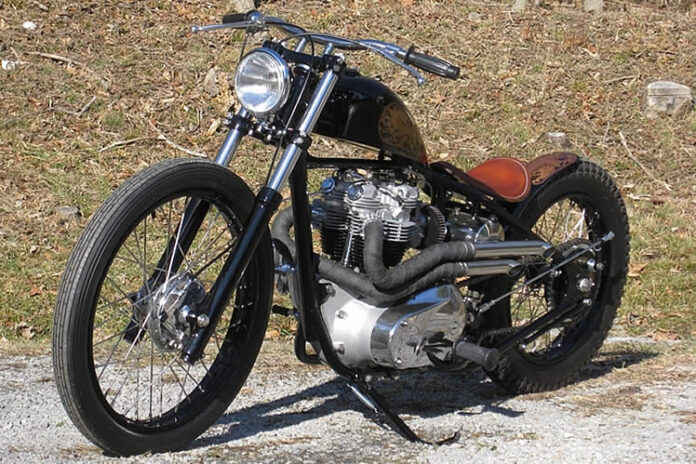 Atom Bomb Custom have nuked Moto Rivista again with their 40 Miles to Vegas, another great motorbike built by one of our favourites Clay Rathburn.

Atom Bomb Custom loves building motorcycles with original and period parts, giving each of their bikes full attention to detail from design to assembly. 40 Miles to Vegas is based on a 1967 Triumph TR6R built for Clay’s friend Zach who wanted the bike to be Frisco style, small narrowed tank mounted parallel with the frame spine and high handlebars. The build started like most other ABC bikes, which includes an in-house rebuild of the Triumph TR6R engine, which sits perfectly on the Atom Bomb hardtail finished frame. 40 miles to Vegas also has a narrowed and sectioned Sportster tank. The tank, fender, and oil bag were all hand fabricated from aluminum by ABC. This bike rolls on 21-inch front and 16-inch rear wheels and has a wrapped up exhaust. Atom Bomb Custom painted the bike in a Vegas looking theme.

According to Clay” This was supposed to be a very Frisco-ish bike, and we suppose it still is, sort of, just with a very large dose of Atom Bomb thrown in.”