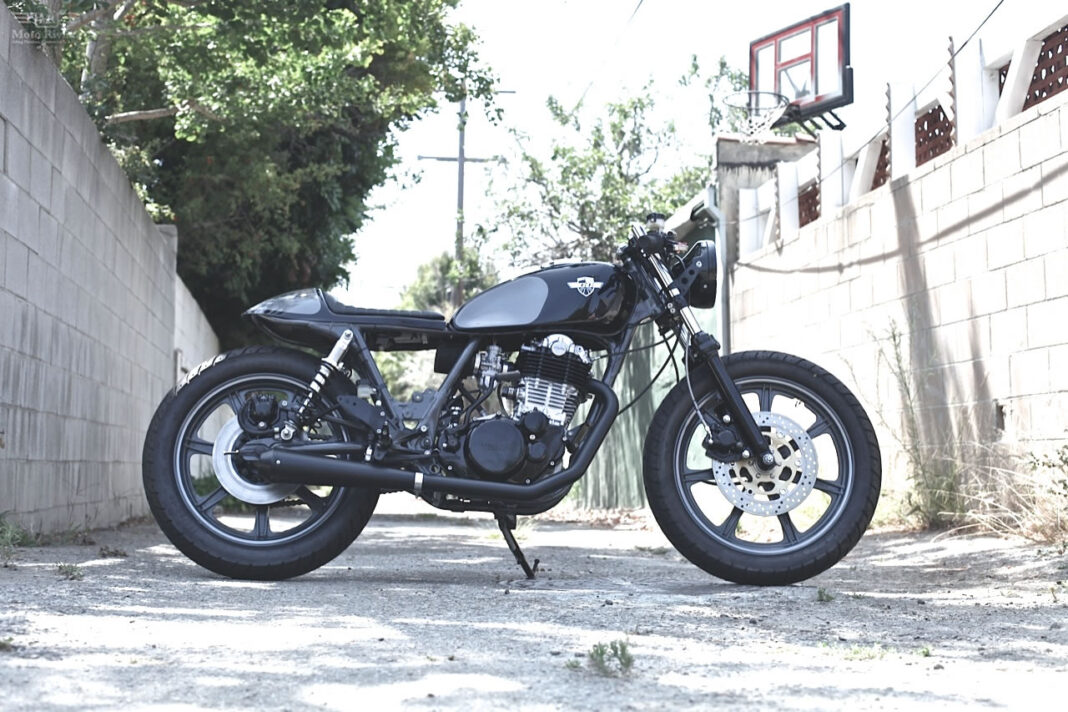 This Yamaha SR500 is a tribute to those serious riders, who will go to any length to ride a motorcycle. Tailored by Chappell Customs, this Japanese fireball is built for one tough nut!

This build has a good story so I am going to handover this over to Chris, one half of Chappell Customs “A client walked in the door, well basically limped in the door. One leg in a cast and arm in a sling and held up by one crutch. After a careless driver decided to turn in front of him causing a massive accident, multiple surgeries and a totaled RYCA cafe racer. He still had the itch and wasn’t ready to give up on his dream of owning a custom-built cafe racer. Chappell Customs was commissioned to build him the cafe of his dreams. This Yamaha SR500 was sitting in the shop and he fell in love with the bike, or what it could be anyway. The bike was a retired AHRMA race bike, with small sport bike wheels and a different front end and covered in war wounds. Basically everything on the Yamaha SR500 was scrapped except the frame and engine. The bike didn’t even have a side stand, or a side stand mount for that matter.”

The build started with some modification to the frame, which has been de-tabbed, sandblasted and powder-coated with gunmetal steel pearl. The rear frame was cut back and hooped off, with a small battery/capacitor tray built under the tail. The bike is now battery-less and runs a capacitor only. All wiring is hidden under the seat pan as well. The new front end is from an XS650, powder-coated black and upgraded with progressive suspension and a billet fork brace.

The ugly XS top triple got a makeover; Chappell Customs machined a custom aluminum ignition key holder and a second plug for the riser holes in the stock XS top triple. Then fitted the bike with a slick black speedo and added some LED lights for neutral and high beam all fitting tightly in the otherwise ugly triple.

The tank was hand pounded by Chris Chappell, and the tail is the first tail that was made and it was specifically designed to fit this bike. The customer also wanted a second seat, fully upholstered with a bit more padding for longer rides. This lead Chappell Customs to create their own new upholstered cafe racer seats. Newer universal versions of this tail design are made from 3/16″ ABS and are fully upholstered (Now available on our website).

The engine was bored to a 540cc thumper, It has a full race cam, race valves and springs, and finally ported and polished and fitted with high flow oil lines. We fabricated a custom front sprocket cover to keep your toes out of it, and add a bit of coolness to the left side of the engine.

These are also in the works and may be available soon as a custom CNC machined bolt on part. The bike was also fitted with ZX10 rear sets, hand made linkage, an aftermarket carb, WORKS rear suspension and better braking up front. We also have a new logo designed by Rob, which we had made into our new domed tank emblems. As always we like to document some of the work in video form and most of this build is available on our youtube channel.

Chappell Customs was just contacted directly from Yamaha to customize one of there new 2014 motorcycles. We were selected along side some of the best bike builders in the nation to participate in a new Yamaha Bolt build off. With only 1 month to complete the build (deadline is end of August) we’ll have our hands full to say the least. We’re probably the smallest shop in the contest, but that’s not gonna hold up back from creating something truly unique with tons of Chappell Customs attention to detail!

The passion which started out from two distant garages is now rolling out some serious custom craft. Stay tuned for more from the brothers at Chappell Customs!