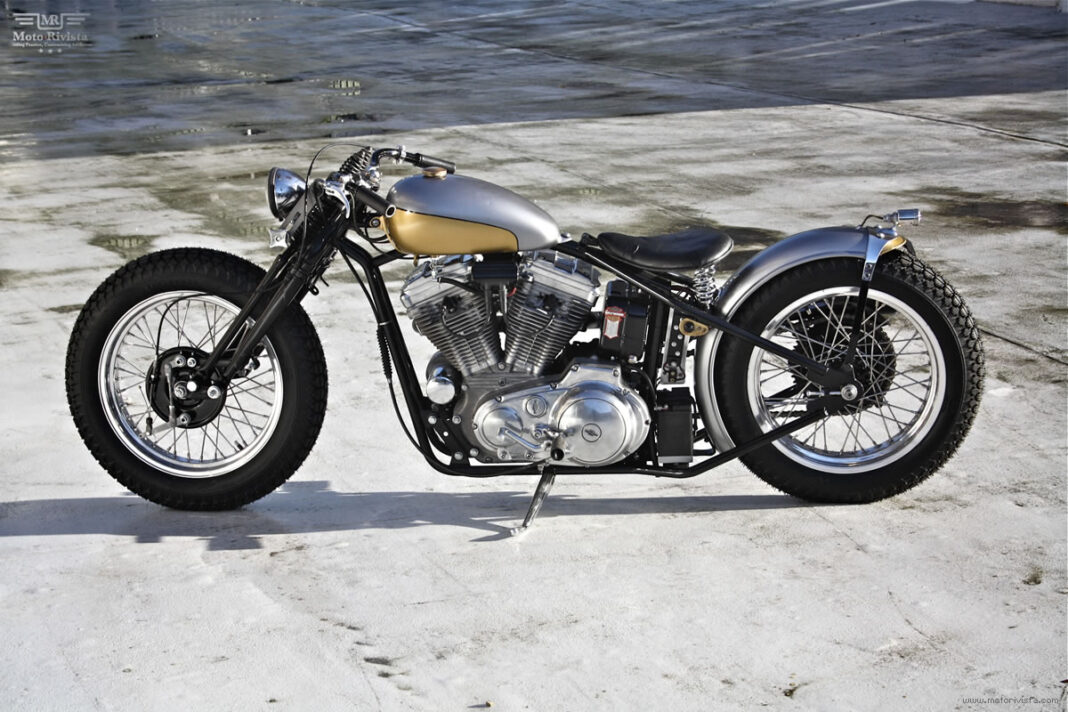 There has been a misplacement of a custom Sportster Evo in Sweden. I am not sure how it happened; the bike I had on my Christmas list has been built and delivered to Tony by Customs from Jamesville.

Either Santa has another trick up his sleeve for me or I need to rethink my Christmas list. Either way I’m not happy James, as I launch the photo gallery again and think of what could have been! 🙂

Every bit of this bike is exactly what I want my dream bike to be, hat’s off to James for his craftsmanship. It takes an artist to build a true custom bike, knowing where to start and how to finish is something not every one knows. But that’s not the case with Copenhagen, Denmark based James Roper-Caldbeck and to prove it the feature of the day is an example of the art of custom motorcycles.

There is a good story behind the build of this custom Sportster Evo. Right after James’ Castle Run event he received an awkward email from a guy (Tony), who was wondering if James could build him a custom bike using an Evo Sportster engine. In James’ words “He didn’t think for a second I would say yes as he thought I only worked on vintage Harley’s.” But as soon as he mentioned he would like the motorcycle built in the style of the Japanese custom bobbers, James was in love with the idea and he instantly called Tony to discuss the project. According to James “I was very interested to find out why he had chosen to build a bike in this style.”

Tony is a tattoo artist, who in 2002 moved to Japan for six years to hone his skills in the art of Japanese tattooing. On his expedition to Japan, Tony discovered how discreet the Japanese custom scene could be. He had never seen bikes of that style, long, low bobbers with incredible handmade details; it was so different from the scene back in Sweden, which had a chopper influence. On his return in 2008 he dreamed of owning a Japanese style Harley but didn’t know of any shops in Scandinavia building that type of bike. So that’s where it ended, just a dream.

Around the same time James Roper-Caldbeck’s wife ordered him a book for Christmas. The book was from Japan and it was the work of a man name Shinya Kimura. James was speechless when he first saw the custom bikes built by Zero Engineering. To James these bikes were the most beautiful custom bikes he had ever seen, so clean and simple, graceful but mean.

Three years later while Tony was trolling on the Interweb he discovered James’ bikes, which had a very similar feel to the bikes he loved. He was also surprised to find out that James’ shop was just over the bridge in Denmark, a short trip from his house in Sweden.

At first James wasn’t sure about this project, since he hadn’t seen any half decent Japanese gooseneck bobbers built by a westerner. In James’ words “I did a lot of research to why this was the case and came to the conclusion that it was because of the frames used. After looking for the right frame in the market I soon discovered there was nothing that I thought was right for this project. Then I came across a UK based company called Fenland Choppers that built a frame close, but not quite close enough. I asked Joe very nicely if he would change the front of his frame to my design, and after quite a few emails we were on. Joe’s frame in my eyes came out perfect and because of his foundation it seemed the ideas for the rest of the bike just came flooding out.”

To begin with the build the engine of this 1988 Sportster Evo has been bored up to 1200. At the front this custom Sportster Evo features a Guide headlight and stock springer fork. The 18-inch sexy Morad aluminum rims are wrapped in ANS Firestone tires. The braking has been settled with springer big-twin front brake while the rear houses Ironhead Sportster brake.

“There was no donor bike for this project, Tony came to me with only the top and front engine mounts, the rest was found every where else in the world. Did I succeed?” Says James.

I believe he did and has done justice to this build, take a look at how every thing has aligned for this project. Tony’s visit to Japan, James getting Shinya Kimura’s book and me sitting here whinging about not getting this custom Sportster Evo for my Christmas gift. I guess I have to keep dreaming and hope one day I may get a bike built by Customs from Jamesville!